Samsung and Korea: Wolves of the North

On top of that, Taiwan's notebooks, servers, network communication equipment, industrial computers are the world's best. South Korea is the top-class player in the global mobile phone market and Samsung, LG Electronics and SK Group all excel in the next generation of high-capacity batteries for electric vehicles (EV). Besides the three big enterprises, South Korea has always been proactive in building the telecommunication environment, indeed enabling South Korea to be a breeding ground for the development of startups. The development strategy of the three major telecommunication companies is worth studying. More than 10 unicorn enterprises, as well as a long list unicorn-to-be enterprises awaiting public listing are also worth learning from.

But semiconductors and ICT-centric supply chains which have been singled out by the Trump and Biden administrations must be incorporated into the US value system. Taiwan and South Korea are wary and fearful in the process of globalization. There leaves no doubt that Taiwan's and South Korea's semiconductor industries must contemplate expanding production systems to advanced economies such as Europe, America and Japan. In addition to a return to the supply chain of North America, the deployment of emerging markets in Asia also involves national strategies and resource allocation approaches.

Despite similarity in national conditions and industrial strength for both countries, South Korea's population is 2.19 times that of Taiwan, and its GDP 2.55 times that of Taiwan. Taiwan's GDP per capita is 86% of South Korea's. But Taiwan's income profile is more evenly distributed which contributes to a relatively small urban-rural gap and little foreign debt, with foreign exchange reserves of more than US$540 billion, while South Korea's foreign debt recently exceeded US$600 billion for the first time.

Taiwan businesses are conservative and cautious, coupled with the fact that many small and medium-sized enterprises are upholding Taiwan's economy. Taiwan's overall industrial and economic strength is no less than South Korea's. South Korea is ambitious enough to build up strength for large enterprises to study advanced technology and furnish high-quality telecommunications application environment to nurture homegrown startups. Taiwan lags far behind South Korea in development of new startups. With these objective conditions mapped in the future national strategic scenarios, the two compete head to head and learn from each other, seeing each other as benchmarks of progess and efficiency.

DIGITIMES recently conducted a preliminary analysis of the top 100 companies in Asia's automotive and electronics industries. Of these 100 companies, 95 are from East Asia: Japan (37), China (33), Taiwan (14), and South Korea (11). We can understand that when the Southeast and South Asian countries move towards the Internet of Things (IoT) and the future cars, most of the solutions will come from the Northeast Asian countries. They are the wolves of the north who will be the key forces of the world's next-generation IT supply chain.

This series of analysis will focus on Samsung's semiconductor, panel, handset, high-capacity batteries and consumer electronics industry sectors in South Korea. It will compare the recent developments in Taiwan, South Korea and China, and explore the future deployment of Asia-Pacific countries to cope with dynamic changes of global IT industry and new technologies. 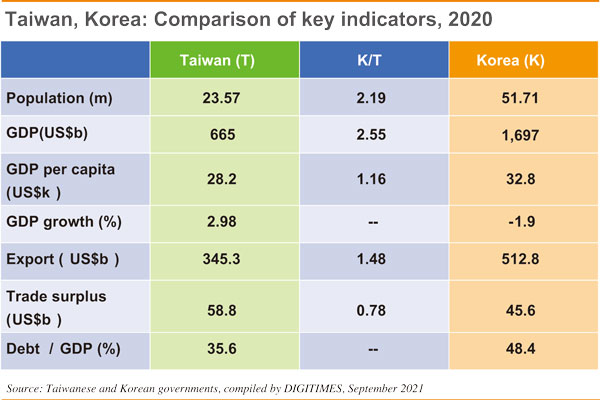