Is Samsung a sworn enemy of Taiwanese businessmen? From the wafer foundry point of view, the answer is perhaps "yes." From the perspectives of other products, then it needs to be seen individually. And even in the wafer foundry sector, TSMC and UMC may look at their competitions with Samsung differently.

To get to know a company, financial reports are certainly important, but everyone may look from different angles, and at different topics, and their conclusions can be surprisingly different. If I told you that Samsung and Taiwanese firms are "more of collaborators than competitors," many might disagree, though it might be true. In terms of profitability, more than 50% of Samsung's profits come from semiconductors, and a vast portion of them comes from memory sectors that Taiwan is not good at. Taiwan's branded mobile phones are not on the same level as Samsung's, and there is no real competition between them. But the increasing cost pressure is sending Samsung buying more and more parts and components from Taiwan.

Samsung's revenue in 2020 amounted to KRW236.8 trillion or approximately US$200 billion, and its 2021 revenue is expected to grow by more than 15 % to about US$230 billion. According to Samsung's financial report, its profit margin of 2020 was 15.2 % and could be close to 18% in 2021, which is tightly associated with the cycle of the semiconductor sector.

From 2009 to 2013, it was Samsung's fastest-growing period. Jumping on the bandwagon of the mobile and smart app boom created by iPhone, Samsung has positioned itself as the number one brand among the Android camp and successfully established itself as the world's best-selling brand. Its IM (Information and Mobile) division with handsets as its core business once contributed three-thirds of Samsung's operating income. But now the main contributor to Samsung's profits is semiconductors. It is estimated that the semiconductor division's profits in 2021 could come to 55-60% of Samsung's profits.

To maintain 50% of total profits from semiconductor is rather difficult for Samsung, without strong support of wafer foundry business. It is unrealistic to place hope on the possibility of the memory market always staying in high gear. Thus, it is inevitable for Taiwan and Korea to compete head to head in the wafer foundry sector. To divert its resources to advanced node processes, it is not a surprising move for Samsung to outsource mid-level process manufacturing to UMC.

Now Samsung and Taiwan are competing directly within the semiconductor sector. Taiwan is a main production base of Micron, while Nanya, Winbond and Macronix also produce a variety of memory products. For high-end memory chips, Taiwan is still Samsung's major buyer. The wafer foundry sector is the only one where Samsung has been singled out by TSMC founder Morris Chang as its main competitor.

TSMC's revenue is 3.7 times Samsung's foundry sales. The total profit for global wafer foundry makers is estimated at US$22.7 billion in 2020, with TSMC accounting for 84.8%, and Samsung for only 4.8%. TSMC's operating profit is 17 times that of Samsung. So even if Samsung were to invest KRW171 trillion (about US$145 billion) in the semiconductor sector over the next 10 years, it would hardly pose a substantial threat to TSMC, which specializes in pure-play foundry business and vows to set aside more than US$30 billion each year in capital investment over the next three years. According to some media reports, Samsung's profit in the wafer foundry business of second-quarter 2021 was only US$268 million, well below TSMC's and even lower than that of SMIC's or UMC's.

Samsung's wafer foundry profits should be less than US$1.5 billion in 2020 and 2021. That's to say Samsung's 2021 profits could be as little as 7% of TSMC's. To challenge TSMC, Samsung will have to focus on winning in niche markets by concentrating its limited resources on the segments it is good at. Therefore, an intense battle between Samsung and TSMC may give UMC as well as other Taiwanese suppliers of products that don't need advanced process support, such as power management ICs, drive ICs, image recognition, more business opportunities.

For Taiwan, it has a trump card in both TSMC and UMC. And those who finally earn the most with ease could be the equipment suppliers! 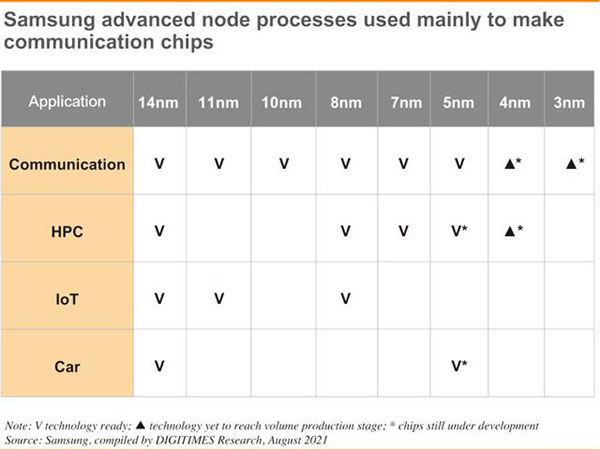