TSMC, Intel and Samsung continue to compete for the leadership in more advanced technologies beyond 7nm node. Samsung has already foretold that it will mass produce for 4nm technology in 2021, with the 3nm process likely to be available in 2023. In the future, Samsung will produce its own chips with its 3nm GAAFTE process. As we all know, Samsung has a lot of contracts from its internal system design center. Only when Samsung wins orders from external customers can there be structural improvements. But many external customers are wary of Samsung's dual role as player and referee which leverages its technology, production capacity and market operations against its customers. Samsung has considered spinning off its wafer foundry business to endorse its credibility, but has not made a move because semiconductor is a highly capital-intensive industry. TSMC has announced that between 2021 and 2023 it will invest US$100 billion or an annual capital expenditure of US$30 billion for capacity expansions. The budget is more than double Samsung's sales from wafer foundry business. A spun-off Samsung foundry business wouldn't be able to afford such big investments all on its own, and would face enormous challenges trying to make profits.

Samsung's profit in the second quarter of 2021 was just US$268 million, far less than TSMC's, and even less than SMIC's or UMC's, according to newly disclosed market data. Samsung depends on "low price" competition to support its position as the second biggest player in the wafer foundry sector. Without support from the lucrative memory segment, or its system IC design department, Samsung's foundry business would find it rather difficult to make a breakthrough in scale and technology. It is never an easy task to run the ecosystem for Samsung's wafer foundry business. Not only would it be unsustainable but could also raise more concerns among customers. Samsung is in a dilemma. We think the chances of a break-up in the short term are not high, but rather Samsung is more likely to wait for the next technological change or market structure reversal that will allow it to make new deployments.

As far as we know, TSMC now adopts the 7nm node process to deliver Tesla's chips. But Samsung has hinted that the next generation of Tesla's car chips will be made using Samsung's 5nm process. But TSMC has already disclosed that it will mass-produce on 3nm process in the second half of 2022, which means Samsung will not have an advantage over TSMC. In addition, in the wafer foundry sector, TSMC in 2021 has secured more than 60 units of EUV tools, but Samsung's wafer foundry division may have less than 20 units by the end of 2020. It is still full of uncertainty if Samsung can secure 30 units of EUV tools by end of 2021. We don't think Samsung can mount a strong enough challenge to TSMC, but it could bring about some subtle changes in the global wafer foundry market that we haven't seen before.

First, Samsung is bound to make all-out efforts to seize high-end business opportunities. Therefore, it is a reasonable option to contract UMC for production at 28nm node. Secondly, while two dogs are fighting for bone, a third one runs away with it. Samsung is keeping a close watch on TSMC, but Intel is emerging as a major competitor. This is not good news for Samsung. Intel is eyeing the customers of both TSMC and Samsung. For Samsung, TSMC and Intel are both rivals. With Intel entering the scene, we may see some dramatic changes in the high-end foundry market beyond 2023. 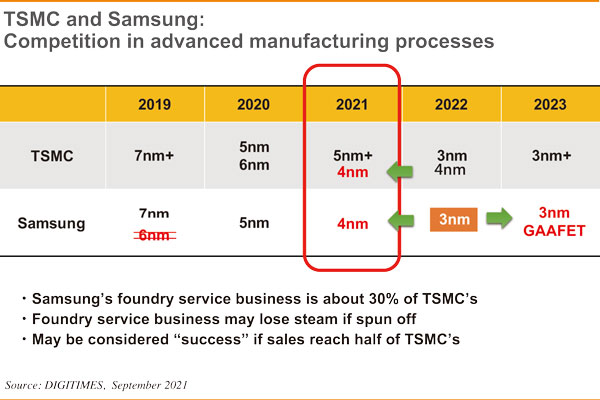