Demand for software as a service (SaaS) has been on the rise, highlighted recently by needs for remote working in the wake of the coronavirus outbreak, which has prompted more firms to adopt cloud-based collaborative operations, according to Kdan Mobile Software founder and CEO Kenny Su.

In particular, demand for mobile device-based collaborative work software solutions developed by Kdan in the China market has drastically increased from 300,000-400,000 downloads a month usually to a double level of 600,000-800,000 ones.

In a recent interview by Digitimes, Su talked about the prospects of SaaS and how his Taiwan-based compnay has expanded overseas.

A: Founded in 2009, Kdan is headquartered, along with an R&D center, in Tainan, southern Taiwan, and has its Asia operational center in Taipei. Kdan has set up two operational bases in China, one in Japan and one in the US. Kdan currently has 130 employees in total, 80 of them are in Taiwan.

Kdan in April 2018 finished series A funding, raising venture capital of US$5 million from US-based WI Harper Group, Taiwan-based Darwin Venture Management and Japan-based Accord Ventures. In 2019, Kdan set up the operational base in Japan mainly for cooperation with Sourcenext, the largest Japan-based software distributor, to tap the Japanese market.

Currently, the US is Kdan's largest market, accounting for 40% of total download volumes and revenues, followed by Europe with 25%, China with 20% and Japan with 5%.

Among Kdan's product lines, Document 365 cross-device app for viewing, signing and editing PDF documents, and Creativity 365 cross-device content creation suite consisting of five creation apps are the major sources of sales. Demand for DottedSign, an e-signing service launched in fourth-quarter 2019, is growing fast with over 50,000 downloads and more than 20,000 registered members so far. Most of users have continued use and been willing to pay for the e-signing service.

Q: How does Kdan manage employees of different cultural backgrounds?

A: Kdan adopts an OKR (objectives and key results) model as used by Google and several international enterprises by setting company's visions and missions as the common goals for employees to strive for. Every employee, including me, lists 3-5 objectives for a certain stage, and these objectives together with what has been done should let the others know to secure transparent internal management. For internal communication, Kdan has set up a Slack-like communication platform across departments and offices for all employees at different locations to communicate via multiple channels for collaboration, with any discussion and talk being transparent.

Q: Why did Kdan transform its business model?

A: Kdan had originally offered paid apps, but in view of increasing competition, offered app versions with basic functions for free download and those with advanced functions on a chargeable basis. Viewing that Apple and Google had offered subscription schemes, Kdan followed suit in 2015.

In addition, Kdan has used a tracking model to ascertain whether users, after free trial use, need advanced functions and are willing to pay. Currently, over 80% of initially trial users have moved on to use chargeable advanced functions.

Kdan has extended operation from B2C to B2B 2-3 years ago. Compared with B2C, B2B marketing takes a much longer time, but many enterprise users usually stick to original suppliers. Basically, Kdan provides cloud-based services for small- to medium-size enterprises and licenses customized APIs (application programming interfaces) or SDKs (software development kits) to large-size ones for them to introduce Kdan-developed software to their internal operational processes.

Q: What are Kdan's visions and goals in the next 10 years?

A: There are many China-based SaaS (software as a service) providers with market values of over CNY10 billion (US$1.43 billion) each, but there are no Taiwan-based SaaS ones. Kdan, with business beginning from the Asia market, aims to become the first Taiwan-based global SaaS company. Kdan plans to tap the Singapore market as a stepping stone into the Southeast Asia market.

Global demand for apps from individual and enterprise users is expected to double every 3-5 years along with fast growing digital transformation, and therefore Kdan expects substantial growth in revenues over the next 3-5 years. Kdan currently has 7-8 million monthly active users and has reached more than 200 million downloads from mobile devices cumulatively.

While US-based SaaS brands will remain leaders in terms of global market share, Kdan is confident of reaching larger market shares in Taiwan, Singapore, Japan and other Asian countries. 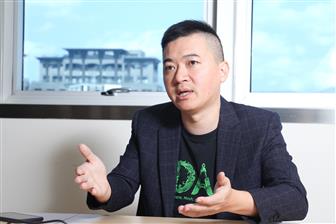