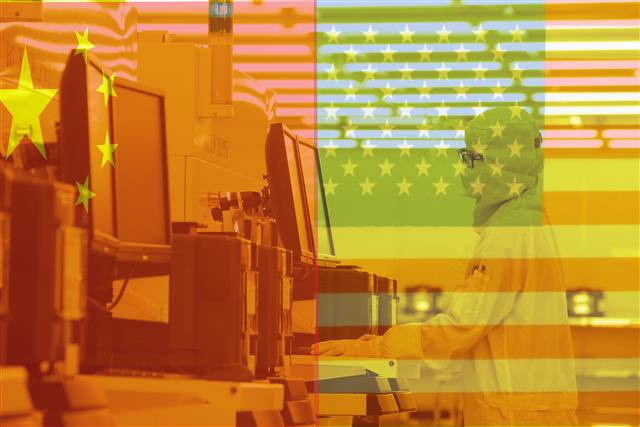 Taiwan's electronic companies such as Foxconn, Pegatron, and Wistron used to produce more than 90% of the laptops in China. Many scholars say the outbreaks of trade war and pandemic have sparked the tech decoupling. Yet, recently released data on Taiwan's computer exports show that the US had already started to become a stronger magnet for tech products, driving the supply chain out of China years before the pandemic and trade war outbreaks.

Since Taiwan is the largest producer of personal computers, servers, and semiconductors, and many of its electronic manufacturing service (EMS) providers assemble Apple and Android smartphones in China and other Asian countries, its export data can serve as a window for the latest competition between the two giant powers.

Computers are not the only sector in Taiwan to benefit from the US market purchasing streak. Another research by the MOF on 48,173 active exporters (across industries) showed that the companies' exporting value to the US had grown 75% over the period of 2016-2020. Such robust momentum was not seen in other regions.

Due to tariffs imposed on Chinese products in the US-China Trade War and the outbreak of COVID-19 pandemic, the demand for goods including computers and auxiliary components produced outside China has been on the rise. The bilateral trade tension has also driven Taiwanese EMS companies to expand production capacities in India, Vietnam, the US, and Mexico, due to US customers' requests for ensuring the cyber security of their products.

Meanwhile, the surge in demand for cloud-based online services due to new applications of artificial intelligence and internet-of-things (IoT) also boosted the need for expanding server production. Since high-value-added products such as servers have mostly been produced in Taiwan, the exports of related products have also been enjoying double-digit growth over the past 6 years, according to MOF. (Figure 2)

Some may argue that it was China that started to decouple from the US long before the trade war. Frankly speaking, the Made-in-China 2025 Initiative announced in 2015 was kicked off by Beijing as a drive to "Buy China".

An executive of a Taiwanese networking and communications device company producing in China told DIGITIMES that China has demanded "local content" of products sold in China to use components produced by Chinese companies, and has set a deadline for locally produced components to reach certain quotas. It also marked the beginning of aggressive M&A activities from Chinese companies to obtain foreign technologies, while the Chinese government doled out attractive incentives for foreign high-tech companies to produce in China.

On the other hand, American tech clients also started to demand Taiwanese electronic manufacturing service (EMS) providers to diversify risks from China. A senior executive of a computer and mobile phone EMS had told DIGITIMES that as early as 2016, his company started to look for suitable alternative sites for producing electronic products, due to pressure from US clients.

However, it is noteworthy that recent weakening signs of China's factory activity may have reflected the global tech supply chain's move out of China. The Purchasing Managers Index (PMI) released by the National Bureau of Statistics of China has been lingering below 50 most of the months in 2022, reflecting the uncertainties associated with zero COVID policy and weak consumer demand. Taiwan's export of optoelectronic components plunged 33%, while capacitors and resisters dropped 20% amid waning demands. Since those components are used for making end products, the contracting factory activities in China could be the reason behind their export slide.

The same phenomenon also emerged in other countries. South Korea's export declined year-on-year in October for the first time in two years, driven by a fall in crucial semiconductor shipments as well as weakened trade with China, according to South China Morning Post. South Korea's exports to China have decreased for five consecutive months as of October. Meanwhile, its exports to the US and EU respectively increased by 6.6% and 10.3% in October, year on year.

South Korea is the largest memory manufacturing country in the world. Since South Korea's declining export to China underscored the drop in demand for its chips, and memory chips are key components for electronic devices and equipment, the shift of electronic supply chains out of China may have a role to play in it.

Wang Tao, head of China Research at UBS Investment Bank, said that China is likely to maintain its current policy for a longer period of time, in which case full-year GDP growth in 2023 could be significantly lower than the baseline forecast.