Taiwan will focus its next wave of technology development on materializing smart healthcare, precision medicine, smart city and digital data governance by leveraging its robust semiconductor prowess to incorporate AI, IoT and blockchain technologies into diverse vertical applications, eventually embracing a smart new future featuring high-security Internet of Everything and thriving digital economy, according to Tsung-Tsong Wu, the country's minister of science and technology.

Wu told Digitimes in a recent interview that the 5G traits of high bandwidth, low latency and wide connectivity, as well as 4k and 8K display screens and camera lenses with increasingly high resolution can be combined to support versatile applications in the near future, particularly allowing cost-effective remote surgery and high-performance security surveillance systems with clear facial images and multi-screen displays.

He stressed that humanity and scientific technology should be closely blended and his ministry hopes to join forces with other ministries in integrating resources and building ecosystems from diverse facets such as infrastructure construction, frontier technology, talent cultivation, digital economy and digital government.

Big data collection, modeling, prediction, transmission and storage as well as information security protection for diverse vertical domains all require the establishment of IaaS (Infrastructure as a Service), PaaS (Platform as a Service) and SaaS (Software as a Service) systems in addition to joint efforts by members in software and hardware ecosystems, according to Wu.

He noted that the National Center for High-Performance Computing (NCHC) at National Applied Research Laboratories (NARLabs) under his ministry has teamed up with academic and industrial segments for many cooperation projects seeking to strengthen IaaS, PaaS, and standard data specs and promote them among industries.

With its tech sectors and innovation ecosystem developing vigorously under the tech island chain architecture, Taiwan has been striving to create a friendly environment for startups and innovations by connecting technology and humanity, aiming to facilitate exchanges of international talent and build a fast and safe Internet of Everything with strong innovation momentum. This has attracted major cloud service giants Microsoft, AWS and Google to set up large-size datacenters in the country seeking to better capitalize on Taiwan's key position in Asia, Wu indicated.

In terms of future digital data governance, the focus must be on smart healthcare offerings including generic drugs, new pharmaceuticals, medical supplies, and health and well-being promotion, and the strategy for biomedical big data concerning disease prevention, diagnosis, medicine, nursing and long-term care services should be even more comprehensively formulated, Wu said.

Citing human biobank as an example, Wu said after a biobank is integrated, biomedical startups should be allowed to join efforts to catalyze a new wave of digital transformation at small- and medium-size biomedical firms and medical service and retail firms.

In cultivating startups, Wu stressed that it is imperative for innovative technologies and startup teams to grow up initially in innovation parks with easy exchanges of international talent. And after their C-round fundraising, the National Development Fund can step in to assist, and venture capitalists and field experiment partners can also join forces to help the startups build international connections, he added.

Wu said tech innovations usually involve high risks, which in turn also imply great momentum for success. He urged Taiwan enterprises to nurture the culture of allowing errors, withstanding frustrations and fighting on despite repeated defeats, so that they can stand out in certain pivotal segments in the next wave of tech innovations. 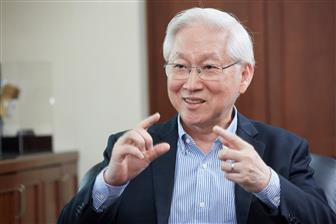