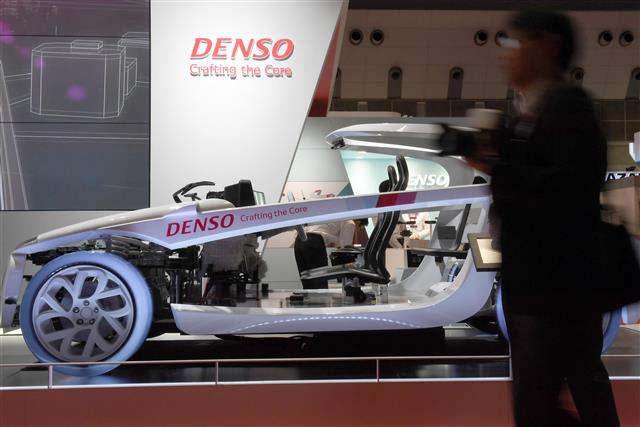 Denso, one of the largest automotive tier-1 system integrators and car parts manufacturers, has committed to sharpening ADAS capabilities for future vehicles.

ADAS, which stands for advanced driving assistance system, is not only designed for electric vehicles (EV), but can also be retrofitted into old vehicles. Denso believes improvements in ADAS will eventually eliminate car accidents and bring to the society the "peace of mind."

In Denso's picture of future mobility, power device in the power control unit (PCU) plays an essential role. And Denso believes that SiC MOSFET will replace silicon-based power devices and that CMOS- and MMIC-based 4mmWave radar will be the mainstream, said Yoshifumi Kato, CTO of Denso and the automotive solution business unit.

According to Denso's latest financial results, the company now generates JPY320 billion (US$2.21 billion) in revenue from ADAS, and the amount is expected to increase to JPY500 billion in 2025.

He added that the additional costs incurred by increasing inventory should be shared by the three parties involved: car OEMs, tier-1 suppliers, and the semiconductor industry.

The next steps to building a resilient supply chain will be to have a better prediction of long-term demand and to standardize the types of auto chips needed. To effectuate the new strategies, the most important will be to facilitate communication between the car industry, tier-1s, and the semiconductor industry.

Electrification will bring about more collaborations between the three parties, and Denso is not worried about being excluded from the collaboration between others as the number of semiconductors used for cars increase. Rather, tier-1 suppliers will be the bridge between OEMs and IC industry, said Kato.

He noted that "there will be a place for tier-1s because the OEMs cannot make their own ECUs just using SoC." Integrating other components such as MCUs, peripherals, power supply, and meters into systemic structures will still be carried out by tier-1 suppliers.

According to Denso, it invested US$1 billion in 2017 in its Maryville, Tennessee factory to produce ADAS components.

Autonomous driving as a social system

While Level 2-3 ADAS isn't new for Denso, Kato thinks the technology does not naturally extend to the Level 4 up, namely autonomous driving (AD).

He stressed that ADAS and AD should be treated differently.

ADAS uses a costly engine with more than five sensors, up to 10 cameras, and many LiDARs to detect obstacles and pedestrians in the streets to activate braking. On the contrary, a self-driving vehicle would be much easier to implement in a strictly defined area where external factors that may cause accidents could be removed.

With that said, autonomous driving should be adopted within a highly controlled area; in other words, it is more of a new social system than a new technology.

Kato said, "The alarm evaluation used by autonomous driving is almost the same as ADAS, but autonomous driving vehicles should not leave the operational design domain (ODD)." The ODD refers to the operation district designated for self-driving fleets, such as driverless robotaxi, providing thorough knowledge of the road structures, signals, digital maps, and so on.

EVs, with or without a driver, also need an enhanced defensive system to protect from cyberattacks. Addressing potential cyberattacks on EVs in the future, the automotive industry should ultimately learn from the IT or banking industry.

Safety features using, for example, zero-trust architecture or quantum key distribution, will require more computational power inside the centralized system. Kato pointed out that it is something the tier-1 suppliers will need to negotiate with the OEMs because "security will come with a price."

For the automotive industry, security, no matter physical or virtual, will always be seen as the most important. There should be a standardized, bottom-line level of security ensured for customers. Beyond that, Kato said they plan to provide OEMs and end-users with extra features that are optional.

(Editor's note: Denso is among the major players in DIGITIMES Asia EV 50 survey.)