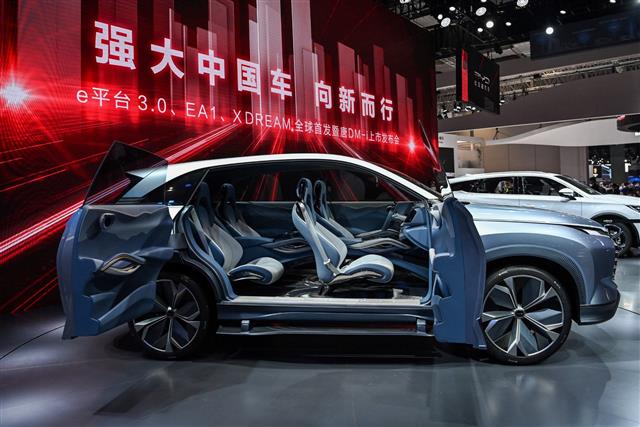 Electric vehicles (EV) are expected to take up 13% of the global passenger vehicle sales in 2022, according to International Energy Agency. The proportion represents an increase from almost 9% in 2021.

Companies in each sector were evaluated and given a score from 1 to 5 based on industry-specific metrics. A higher score means the company has achieved more advanced development in that metric.

Checking the performance of each primary Asian markets' top OEM in EV 50 could reasonably understand the status of EV development in these countries. The comparison was based on the aspects of EV business scale, battery, powertrain, ADAS/self-driving technology and fast charging/battery swapping. For example, China-based BYD and Hyundai Motor of South Korea are the front-runners compared with Toyota, Tata Motors and VinFast. According to the EV 50 survey, BYD leads the pack with the most EV sales of 594,000 vehicles in 2021, boasting vertical integration from self-made batteries to ICs. The company overtook Tesla in global EV sales in the first half of 2022.

Hyundai beats Toyota with an early dedication to hybrid, plug-in hybrid and battery EVs. Its investment in batteries and fast charging particularly helps it stay at the top of the ranking.

Toyota did not reveal its BEV ambition until the end of 2021 while seeing stable HEV sales for years. Therefore, the company hits a lower point in battery and charging technology development than its Chinese and South Korean competitors in the survey.

On the other hand, emerging EV makers Tata Passenger Electric Mobility (TPEM) and VinFast are expanding with the support of their respective mighty parent companies. While TPEM and VinFast can not yet compete with other legendary Asian automakers, they have sped up efforts in battery production and autonomous driving technology development.

China's EV market is the first to achieve economies of scale globally, with the most production and sales volume for the past seven years. According to the China Association of Automobile Manufacturers (CAAM), the country's sales will exceed 5.5 million vehicles this year, a 56% increase from 2021. Tom Lo, research manager at DIGITIMES Research, said that a carmaker's success traditionally depends more on reliable suppliers. In the case of EV manufacturing, seeking the most advanced batteries, electric motors, ADAS and other technologies is the priority. The situation creates opportunities for more China-based businesses.

In addition, Lo said the country's automotive industry can make a smoother EV transition because its ICE businesses have not been as well-developed as Japan's or South Korea's.

With government subsidies and other incentives, Lo added that China's EV segment is likely to grow the most among countries that have experienced electrification. EV 50 shows that China has built a robust EV portfolio as traditional automakers and startups accelerate car development and production. Moreover, the country holds significant advantages in battery technology, an essential part of EVs. SNE Research's data shows that six of the world's 10 largest battery makers are from China, with the Chinese maker CATL dominating the group with the highest shipment consecutively in the past five years.

Additionally, China has fostered a pack of automotive electronics providers, including leading display technology and LiDAR suppliers. The country does not hold an advantage in EV 50's automotive IC sector like Japan, but it has cultivated the capability and seen distinguished players emerge.

As for startups in EV 50, NIO is one of China's leading battery swapping technology providers. It has built more than 1,100 swapping stations in the country and brought the solution to Norway. The company plans to set up 4,000 swapping stations worldwide by 2025.

Desay Sv Automotive is China's largest Tier-1 supplier and dominates intelligent cockpit innovation, according to EV 50. It has been developing with Qualcomm its fourth-generation product featuring high computing power and enhanced connectivity. Primary carmakers in China, such as FAW-Volkswagen Automobile and SAIC General Motors, are all Desay Sv's customers.

Tianma has developed automotive displays for over 20 years, ranging from dashboard, head-up display to center console. It saw a 27% increase in automotive sales revenue in 2021.

Robosense Technology is one of the foremost LiDAR solution providers in China. According to Yole Developpement's LiDAR for Automotive and Industrial Applications 2021 report, Robosense shipped the second-most products in the world, only behind Valeo.

The company is backed by BYD and serves a group of prominent OEMs, including US-based luxury EV brand Lucid Motors.

Japan and South Korea both possess an internationally-recognized automotive industry with a more extended history than China. The industry's innovation usually depends on major OEMs. For example, Toyota has acted slow on electrification compared with its counterparts in China and Europe, delaying Japan's EV transition to some extent.

Toyota has established solid supply chains encompassing renowned Tier-1s such as Denso and Aisin. These suppliers, which have their own subsidiaries and contractors, focused on products for gasoline cars in the past. If Toyota were to stop making ICE vehicles, it would seriously impact the suppliers' businesses. That may partly explain why Japanese OEMs have not fully embraced BEVs.

However, over the years, Japan has nurtured a group of automotive electronics providers dominating electric motor, power electronics, ADAS/self-driving and other key components. The country also holds the most substantial automotive IC competence in Asia. These suppliers are the most valuable asset when Japan builds its EV system.

Denso will set up a dedicated IGBT production line at a 12-inch wafer fab of USJC, a subsidiary of Taiwan-based pure-play foundry house UMC. The duo said they plan to start mass production in the first half of 2023.

Renesas, one of the four largest automotive IC companies in the world, takes the lead in power management IC, power component and ADAS/autonomous driving, according to the EV 50 survey. It also has developed automotive system-on-chips (SoCs) that support intelligent cockpit, connected gateway and other applications.

While its automotive supply chain may not be as sophisticated as Japan's, South Korea began to develop BEVs on a larger scale early on. Moreover, the country announced the Korean New Deal in 2020 to boost EVs and hydrogen cars growth with an investment of more than KRW20 trillion (US$14 billion).

Hyundai plans to build battery manufacturing facilities in the US state of Georgia, as part of a US$5.5 billion EV project. The carmaker is also constructing a battery plant with LG Energy Solution (LGES) in Indonesia.

South Korea has become the second-most important battery manufacturing base worldwide, behind China. The top three makers, LGES, Samsung SDI and SK On, are the front runners in the EV 50 survey's battery ranking. They all have a global presence.

LGES accelerated worldwide expansion after going public in January this year. Its production map includes South Korea, China, Poland and the US. The broad coverage is critical to secure first place in the ranking.

In addition, LGES enjoys the advantage of accessing cathode material and other essential battery substances from LG Chem, its parent company.

Although its production capacity can not compete with LGES yet, Samsung SDI also possesses a notable global presence with plants or R&D centers in South Korea, the US, China and Hungary. In July this year, the company also broke ground on a battery plant in Malaysia.

Investment in battery materials is another reason the Samsung subsidiary secures a leading position in EV 50. For example, last year, it transferred part of its cathode materials production lines to STM, a subsidiary, and invested KRW150 billion in ramping up production.

SK On also scores high in battery materials, according to EV 50. The company joints China-based battery maker Eve Energy and material supplier BTR in a high nickel cathode project in China. The enterprise went into mass production in July.

Other regions in Asia still await an established EV ecosystem. But some standout players have attracted the world's attention, making the EV 50 survey. These companies show the potential of the emerging markets that they represent respectively.

Hon Hai enjoys advantages in key components accessibility. Its affiliate Innolux has been boosting the automotive display business. In addition, it holds the majority share of Advanced Power Electronics Corporation, a Taiwan-based IC designer, to get IGBT and MOSFET devices.

Hon Hai also initiated the Mobility in Harmony (MIH) open EV development platform, which has more than 2,400 members, including OEMs, Tier-1s, electric motor producers and many others. The company aims to utilize the open ecosystem to lower the entry barriers and speed up innovation.

One of MIH's members is India-based Tata Motors. Its Tata Passenger Electric Mobility (TPEM) recently announced the purchase of a Ford drivetrain plant in the country to ramp up production to 300,000 cars annually.

Moreover, Tata Elxsi, a design and technology service provider, has developed an autonomous vehicle middleware platform, Autonomai, and licensed the technology to one of the world's top-5 OEMs. The advancement secures Tata's leading position in the country.

On the other hand, VinFast is poised to be a rising star in Southeast Asia. The company built its first pack of EV models with technology support from European automotive suppliers.

VinFast positions itself as an international OEM and has entered the US, European and Indonesian markets. In all the EV 50 survey metrics, VinFast received a higher point in battery investment. The company has teamed up with China-based Gotion High-tech to develop lithium-ion batteries and Taiwan-based ProLogium for solid-state batteries.

In sum, EVs have brought fundamental changes to the global automotive industry. China has risen to be a pioneer in the sector with the largest market size and technology competence. However, as the US and other western countries begin to reduce reliance on China, whether it can maintain the momentum remains to be seen.

On the other hand, Japan and South Korea must get rid of the burden of ICE vehicle manufacturing to leap into EV production. Taiwan, India and Vietnam need to catch opportunities among the electrification to gain their worldwide presence.