According to DIGITIMES Research analyst Stella Weng's study, MediaTek's application processors (AP) were used in only 8% of Samsung's handsets in 2019, but the proportion shot up to 16% in 2020, with a chance of rising to 37% in 2021. The reason behind the rapid increase of MediaTek's share is related to the progress and yield rate of Samsung's 5nm/8nm nodes. As the most cost-effective solutions, MediaTek's 4G chips are favorites for Samsung, which has been very demanding in cost requirements. MediaTek's rise is heaping pressure on Qualcomm, which may be forced to adjust its strategy concerning partnerships with foundries in 2021. Starting second-half 2021, Qualcomm is likely to sharply increase its outsourcing to TSMC.

With its high reliance on KYEC 's IC packaging and testing service, MediaTek was alarmed by the news that some employees at KYEC were tested COVID positive in June. But MediaTek saw no major impact, as it still received full support from KYEC, plus help from ASE. Taiwan is a small country where companies can extend help to one another easily. This is Taiwan's unique competitiveness.

Huawei's affiliated HiSilicon attempted to challenge MediaTek's leading position, only to fail in the wake of the US-China trade war. MediaTek has benefited from Huawei's woes, and Huawei, once the second largest customer of TSMC and the third largest semiconductor buyer in the world, has gone back to square one, and started making changes.

Unisoc's achievements in the handset AP sector are also quite remarkable. Unisoc is expected to ship 67 million APs in 2021 and has set its goal at 100 million units in 2022, posing a threat to MediaTek's business opportunities among Chinese handset customers.

China's policy favors its homegrown IC design houses. In the AP sector, MediaTek will face an extremely intense race. The handset AP market is highly competitive. Aside from MediaTek and Qualcomm, Samsung is also a strong competitor in the market.

Samsung has succeeded in penetrating Chinese brand Vivo's handsets, and is expected to ship 11 million high-end APs in 2021. However, Samsung handsets have come under a lot of pressure in recent years. Its S series (shipments for which used to top 50 million units a year), and its entry-level and midrange phones (both of which are now becoming the vendor's main focuses) have adopted outside processors. It is estimated that 37 % of Samsung's phones will come with MediaTek processors in 2021. There has also been speculation that Samsung will purchase processors from Unisoc, which offers exceptionally cost-effective products. But Unisoc supplies mostly 4G processors with very limited volume in 5G. 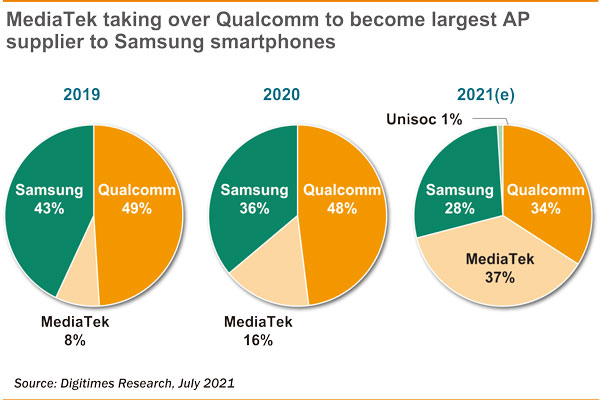 (Editor's note: This is part of a series of analysis by DIGITIMES Asia president Colley Hwang about the global IT supply chain.)