TSMC dossier (2): The 3 phases of transformation

Since its founding in 1987, TSMC has undergone three phases of development. The first phase saw it stress its position as a pure-play foundry. Like most other companies in Taiwan, it was seeking to gain a foothold in the semiconductor manufacturing sector. Its focus was on making chips and its message to customers was that they could completely trust TSMC. By not meddling with customers' business and upholding the core value of neutrality, TSMC concentrated on creating values for customers. During this phase, TSMC was a small potato who wished it might rival Intel someday.

TSMC in this phase had gotten the knack of corporate operation and persisted in building its core competence. However, it was just one of the slew of outstanding semiconductor firms at the time. It was not until the 1998 Asian financial crisis did TSMC undergo significant changes in its business model and corporate culture. With Taiwan's tech industry gradually maturing, its IC design sector started to enjoy growing business opportunities as manufacturers were replacing imported parts with those made locally, which fueled TSMC's revenue while it was gaining ground in international markets as well. Taiwan's own IC design sector served as not only a good test field but also a steady revenue stream for TSMC. It was also at this time that TSMC started to shake off UMC.

Operating on the foundation of its core competence, TSMC is able to keep making profit year after year and secure more than half of the foundry market. By investing 8% of its sizeable revenue into R&D, TSMC's tech leadership is guaranteed. The commitment to persistently stay the course is the key to TSMC's unparalleled success today.

TSMC's R&D team comprising hundreds of professionals was a rare sight around year 2000. These professionals witnessed how TSMC managed a large team. It was also at this time that some of them started showing their potential and would go on to become key members of TSMC's management core today. TSMC founder Morris Chang started passing on the baton to Rick Tsai, Shang-yi Chiang, Mark Liu and CC Wei to lead process technology development and cultivate the company's ability to provide diverse services to customers. Tsai made outstanding achievements driving TSMC's performance through challenging times. But some say that Tsai failed to seize the opportunity during the 2008 financial crisis by boldly expanding market presence when everyone else was running scared. It is Morris Chang who takes credit for choosing to invest heavily in 28nm technology, which allowed TSMC to widen its lead over the competition and enter the third phase of its transformation. 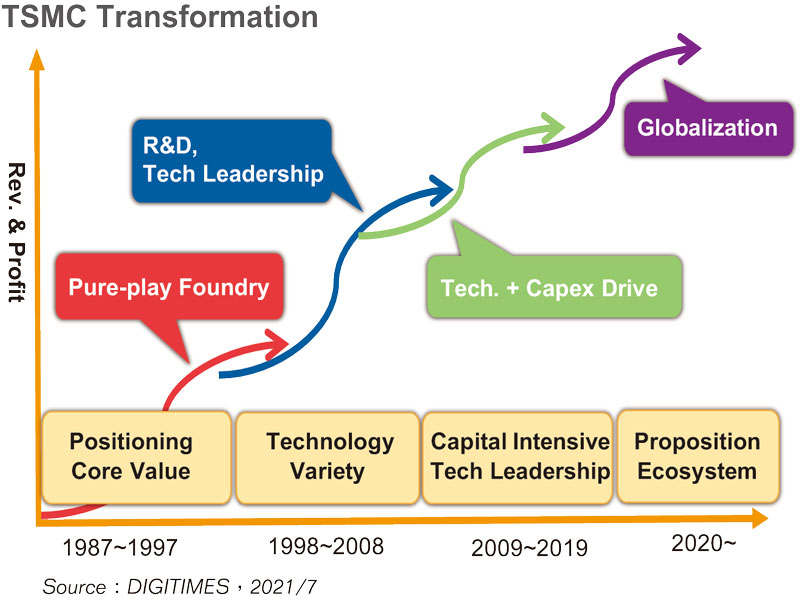 As semiconductor processes advanced to the critical stages ranging from 0.13um to 28nm nodes, managers were generally still able to supervise R&D teams comprising a few hundred engineers. With leading-edge process technologies on top of efficient and simplified operation flows, TSMC became a top-notch firm around 2000. After 2009, the leader turned even more aggressive and delivered jaw-dropping results. Before 2009, TSMC was in the "Tech Leadership" phase of development when R&D came before everything else.

TSMC made even greater strides forward and further widened its lead during the last few years of Morris Chang's leadership followed by the dual-track management by Mark Liu and CC Wei in the recent couple of years. Chang retired in 2018, feeling that his work was done. TSMC's winning formula is "leading-edge process technology + peerless capital expenditure." Securing more than 50% of the foundry market, which is several times more than its competitors' market shares, TSMC is the winner that takes all with its unparalleled capital, technology and customer relationship.

A look at the current world dynamics reveals that TSMC's next-stage goal may be expanding internationally with an aim to strengthen its human resources, materials, equipment and applications. Investment in overseas markets is definitely on the roadmap but the US is not the only target. Collaborations with Japan and Europe in material and equipment research may also be on the horizon.

(Editor's note: This is the second part of a series of analysis by DIGITIMES Asia president Colley Hwang about TSMC's competitiveness and the foundry sector.)