TSMC's capital expenditure exceeded US$10 billion for the first time in 2016. If TSMC further increases its capex and it drives investments into peripheral businesses and attracts funds from foreign corporations, the contribution these investments will make to Taiwan's GDP growth is worth investigating.

Taiwan's GDP came to US$566.3 billion in 2016. GDP is the sum of government spending+investment+trade surplus+private consumption. Calculated based on the assumption that investment accounted for 20% of Taiwan's GDP, investment in Taiwan amounted to about US$110 billion. TSMC represented no less than 10% of the country's total investment. TSMC's enormous investment came at a time when others were not eager to make investment.

It has not been a problem for TSMC to invest in equipment and R&D. However, access to stable electricity supply may be the Achilles heel to TSMC as EUV equipment is extremely power-hungry. For TSMC to have access to high-quality utility services fo electricity, water and others, it has been enjoying long-term support from the government and society. And in return, TSMC has never dodged its corporate social responsibility. TSMC has pledged to donate five million doses of COVID vaccine to the Taiwan government - a clear expression of the foundry house's corporate culture and its win-win approach to fulfilling its corporate social responsibility.

It is not easy to run a good company, not to mention one that is highly connected to social values while maintaining a high level of autonomy. By leveraging Taiwan's industrial advantage, TSMC has built up layers upon layers of barriers on the foundation of its utmost core values that have propelled it to success. 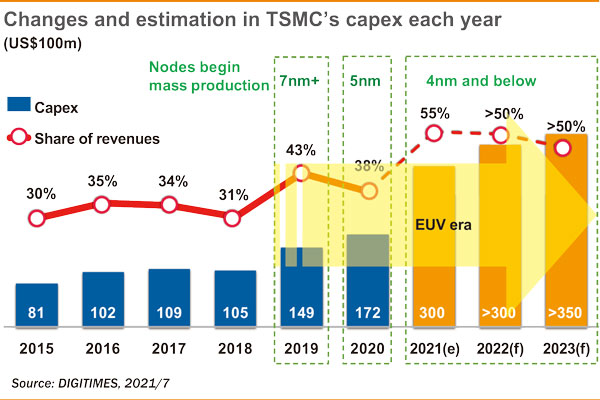 (Editor's note: This is the fifth part of a series of analysis by DIGITIMES Asia president Colley Hwang about TSMC's competitiveness and the foundry sector.)