Smartphone AP shipments to China to pick up in 3Q20, says Digitimes Research 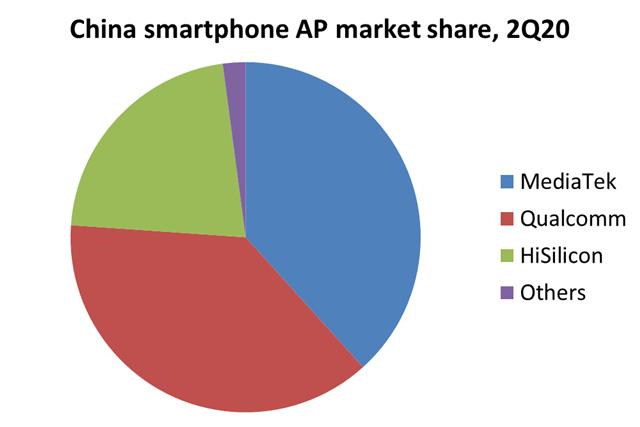 Smartphone application processor (AP) shipments to China are expected to grow 9.3% sequentially in the third quarter of 2020, driven by a pick-up in shipments of 5G-enabled phones in China and a mild improvement in overseas demand for smartphones, according to Digitimes Research.

Shipments of smartphone APs to China totaled 170 million units in second-quarter 2020, up 25.8% on quarter but down 20.2% on year, Digitimes Research figures show.

In terms of second-quarter smartphone AP shipments by suppliers, MediaTek secured the top spot with a 38.3% share, bolstered by strong buying from Huawei. Qualcomm ranked second with a 37.8% share and HiSilicon Technologies followed with a 21.8% share.

MediaTek is expected to see its share in China's smartphone AP market move higher in second-half of 2020 thanks to Huawei stepping up purchases of its 4G and 5G SoCs at the expense of HiSilicon's share.

While smartphone AP shipments in China are expected to post a sequential gain in the third quarter, the quarterly AP shipments will still see a contraction of 12.7% annually as the lingering pandemic continues to dampen consumer demand for handsets.

In terms of process technology, the share of smartphone APs shipped to China made on the 6/7/8nm nodes dropped to 32.4% in the second quarter and will continue to fall in second-half 2020 with Qualcomm and HiSilicon rolling out more 5nm chips.