Science minister Chen Liang-gee has been making a lot of efforts grooming Taiwan's startups, a clear example being his ministry's arrangement of a large delegation to Eureka Park at CES 2019. Taiwan has also been keen to promote its own edition of startup showcase, InnoVEX. Ahead of the annual event, which takes place in Taipei from May 29 to 31 this year, Chen talked about Taiwan's plans and visions for promoting its innovations and startup teams.

There are four elements supporting entrepreneurships: Capital, talent, technology and market, according to Chen. Taiwan had seen a disruption in investments in startups since the dot-com bubble burst in 2000 and the migration of manufacturing operations to China - until recent years. Now more locally-groomed or overseas-educated talent is jumping onto the startup bandwagon, with government stepping up efforts to connect them with local and overseas accelerators.

Chen described the accelerators as the "table top" sitting on the "four legs" - his metaphor for the relationships between the funding programs and the four entrepreneurship elements.

He said the four elements need the accelerators to integrate them. The accelerators introduce technologies and industries which can inspire startup teams' innovations and connect them to the industries. Whether it is small fledging startups or more experienced enterprises looking for new opportunities and clients - they can rely on such help to wow the market with solutions that connect well with the ecosystem and meet what the market really needs.

Chen said Taiwan has done it differently from the US and Europe in terms of grooming its entrepreneurs. In the US, some start setting up their businesses while still in high school. In Taiwan, starting a business may be more about fulfilling parents' expectations. That is why young people in Taiwan have received little training or education that steers them towards entrepreneurships. Despite that, now there have been a lot more young people in Taiwan founding their own businesses with support from the Ministry of Science and Technology (MOST), receiving much attention and acclaims from many other countries, said Chen.

He noted the strong ICT technology prowess that Taiwan has built up over the years remains the core competitiveness of the country when providing support for worldwide businesses. Taiwan has a population of only about 23 million - accounting for 0.36% of that of the global total - but it has still been able to build a strong and globally-renowned ICT supply chain that the world relies on heavily. The science minister is very confident about Taiwan's global competitiveness, enabled by talented people in diverse fields who are able use their knowledge in cross-domain applications.

Exchange programs with foreign institutions have allowed Taiwan researchers to see more of and connect with the rest of the world, such as the Stanford-Taiwan Biomedical Fellowship Program (STB) - which has entered its 10th year - and the Berkeley-Taiwan Biomedical Fellowship Program (BTB) - which has entered its second year. Chen likened these exchange scholars to "potential seeds" that can inject new energy into Taiwan when they return home.

These seeds may grow into "big trees" by founding their own businesses, or become mentors of other startup teams. Chen said such interaction between different teams will enable creativity in multiple and diverse forms. He also noted that some programs have enabled one to three entrepreneurs to stay and learn in Silicon Valley for two to three months. But he said such exchange programs may be expanded to include 20 to 30 startup teams a year. These programs will let the startup teams get a quicker and clearer understanding of the resources and principles of entrepreneurships in other countries, and at the same time connect them to the innovative ideas of other communities.

Taiwan must think hard how it can integrate its hardware prowess with software in order to catapult its innovations and startup teams to higher levels in a new wave of digital transformation - an integration sought after by those embracing the Fourth Industrial Revolution and attempting to fulfill demand for Internet of Things (IoT) applications.

Development of new products will have to cater to specific scenarios. The hardware-software integration must also provide multiple services and a link between those front-end services and devices. Chen cited Taiwan's precision machinery sector as an example. He said it is not the machines themselves that need to be upgraded; what is needed is that they have to come with multiple IoT sensors that connect and inspect each and every step of the procedure during the manufacturing process.

He said the key to future development is not just the hardware - namely the machines, but also the software that managements the machines.

In contrast to software development, hardware manufacturing and production capacity installation need much more capital investments. That's why many startups - usually short of funding - choose to focus on software development. Chen suggested the idea of "hardware accelerator." He said hardware alone may not create too much value, but if software development is based on extension from hardware, then the results would be more competitive.

Chen said the Taiwan Tech Arena (TTA) plans to incubate 100 startups a year, with half of them to be foreign teams. This is meant to let local teams come into more contact with international counterparts, investors and experiences.

As to how Taiwan can attract foreign startups to come here instead of Silicon Valley or Europe, Chen said the key is let them have industry links and opportunities that they may not get in other countries. Their businesses will also be getting support from relevant government projects. That is to say, according to Chen, stationing in Taiwan will add to their competitiveness, which will naturally attract and keep them here.

Taiwan may be a small country with a small market, but Chen pointed out that Singapore is much smaller, and yet has been very active in the startup sector. He thinks Taiwan can work as a partner for startups from Singapore and other countries, facilitating the development of Taiwan's ICT applications and forming a more complete ecosystems enabled by international links and better technologies. He said France is also stepping up efforts grooming its startups, and Taiwan may send its startup teams to France, Israel, Boston, Singapore, and San Diego - places and countries that are known for their startup developments - for short-term exchange. Chen thinks such exchanges can inspire Taiwan startups' innovations.

The 'national team' of startups

In order to let the world see Taiwan's innovations, MOST set up a pavilion at VivaTech in France. The MOST-led delegation of 40 startup teams to Eureka Park at CES 2019 was also a huge success. It means that startups in Taiwan no longer need to fight alone; they will receive support from the government, which is keen to promote the nation's startup scene as a whole.

Chen said Taiwan is well-known for its ICT manufacturing capabilities, but it is now time to shape a distinct image in the startup sector. He said it may be more efficient to work as a "national team," building a new image of Taiwan as a whole to attract investors and create opportunities for its startups.

MOST focuses its resources on advancing the country's technology, which means it plays a leading role in helping other government units and academic researchers try out their ideas. For example, in 2017 MOST worked with the Council of Agriculture to develop smart agriculture. MOST integrate all necessary technologies and build up a agricultural park whose management the COA later took over. Chen said that's the role his ministry has been playing.

MOST has also been working closely with academic researchers. The risk of failure is high for academic research teams to build up their startup businesses. But more investors now accept that only a minor few could grow into "big trees."

Chen noted that voice is still the fastest and most intuitive way of communication between people, and therefore AI-enabled technology for dialogue will be very important. MOST and various other institutions, such as Public Television Service (PTS) and National Education Radio, have been working together to build up a voice database.

A total of almost 2,000 hours of Chinese voice data has been collected, with plans to expand to a database of 5,000 hours - presenting a significant collection of various languages and dialects that are used in Taiwan, Chen said. As for use of the database, Chen said big ICT firms may choose a relevant field where they can make use of the voice data and incorporate it into their chips. With the local database, Taiwan firms would not need to get licenses from Google or other international IT firms when putting their voice technologies into practice, Chen said.

Many businesses have been keen on adopting new technologies to increase their values, solve problems, and cut costs. Chen noted that a lot of the conventional industrial sectors are introducing AI, big data analytics and predictive maintenance to enable their manufacturing. He thinks AI applications will see explosive growths in the next five to 10 years, particularly in the form smart manufacturing, such as using IoT technology, cloud-based control and robots. The smart medical care may grow more slowly because the laws will be stricter in order to protect human lives.

AI chip development is key to Taiwan's future IT industry. The age of the Internet is one where the winner takes all. But the AI age of the future needs domain-focused applications that integrate software and hardware. And this is exactly where Taiwan stands a chance of giving birth to its own unicorn businesses. He cited a few examples where services are built on hardware: electric scooter vendor Gogoro; AI application provider Appier; and AR/VR-based shopping platform iStaging.

Chen's ambition is to let Taiwan give birth to 300 new startups every year. Such a massive scene would create tremendous momentum for interaction and exchange of resources, technologies, talent and capital.

Chen said he began promoting startups in 2007 when he was still at National Taiwan University, and since then he has seen a lot of changes to people's mentality - changes that are positive for entrepreneurships. Back then people were afraid of failures, but now more investors and enterprises accept the fact that it takes time for startups to grow. They also accept the idea that it is worth taking the chances as long as a certain proportion of the startups will succeed. 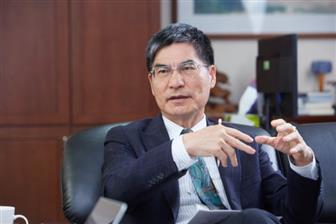