Taiwan RedEye Biomedical will present at the upcoming CES 2020 its home-based health-monitoring optical hemoglobin sensor that can provide insights into people's health in just 10 seconds, according to the company.

The Taiwan-based startup is introducing what it calls the world's first hemoglobin sensor that performs an optical scan of toilet water after bowel movement to detect invisible blood. This is a significant improvement from the traditional fecal occult blood test (FOBT), with which people have to collect stool samples, making sure the sample does not mix with water, and send the samples to the hospital or lab for testing. RedEye said its home-based health monitoring solution allows regular checks to be conducted and can encourage people to more willingly go to the hospital for early detection - a great step forward in preventive healthcare.

RedEye has been chosen by the Ministry of Science and Technology (MOST) to present its award-winning solution at the Taiwan Tech Arena (TTA) at CES 2020, allowing it to expand beyond Asia and connect with more international investors, medical institutions, distributors and bathroom accessory brands to jointly build a global healthcare ecosystem.

Pre-warning can start at home

RedEye said its optical hemoglobin sensor is not intended to replace the conventional examining procedures at hospitals. Quite the contrary, it is aimed to serve as a self-monitoring solution, with which pre-warning can start at home and people can take precautions and go for more detailed checks.

Bleeding is an early sign of many serious diseases, according to RedEye's founder Nelson Yan, citing colon cancer as an example. It is the most commonly occurring cancer in Taiwan for 11 consecutive years with more than 15,000 cases being diagnosed every year. That is, 41 people are diagnosed with colon cancer a day on average. More than one third are stage 3 or 4 cases and they only go to the hospital after finding blood in the stool or experiencing other obvious symptoms. Making use of photoelectric technology, RedEye's hemoglobin sensor enables health screening at home so that people can detect early warning signs such as invisible blood and take precautions.

People can also use RedEye's solution at home to regularly monitor intermittent bleeding resulting from tumors or polyps with scientific data which can be saved. In the future, they can also keep track of the measurement results with trend charts through an app purpose-built to work in correspondence with RedEye's hemoglobin sensor.

RedEye looks to expand into US, Europe and Japan

Aside from detecting early signs like bleeding resulting from colon or stomach cancer, RedEye's hemoglobin sensor can also check blood in the urine, which can be a warning sign of diseases such as kidney cancer, bladder cancer, urinary tract infection, kidney stones and urethritis. In the future, the sensor, after being wrapped in filter paper, can be inserted 4cm into toilet water after urination. It will take only 10 to 15 seconds for the sensor to show a positive or negative result, Yan said.

Yan pointed out that there could be other substances in the water including anthocyanidin, chlorophyll and uric acid. RedEye is working with National Taiwan University Hospital Hsin-Chu Branch on clinical studies to develop algorithms that can collect optical readings and intelligently identify different substances.

RedEye's sensor currently come in the form of either a handheld device that can be mounted on a wall or placed on a bathroom counter, or a module that can be embedded in a smart toilet. For the former, the company is looking into ODM partnerships with international brands as well as potential China-based OEM opportunities. It is projected that 80% of the product sales will be B2B and the remaining 20% will be B2C through e-commerce channels.

Smart toilets designed and made by a Japanese bathroom equipment brand are being marketed in Taiwan with plans to expand into American and European markets to follow. RedEye was chosen to participate in the From IP to IPO (FITI) program. As part of the startup incubation program, RedEye employees were sent to the Netherlands for training for a month in September, 2019. Dutch health examination centers have expressed interest to lease RedEye's solution, which gave a boost to the RedEye team's confidence in their product's application in smart toilets, Yan said.

In addition to steadily expanding its market footprint, RedEye, with an NT$20 million capital, plans to undertake another round of funding. The target is to add NT$30 million to its capital by 2020, raising the total to NT$50 million. 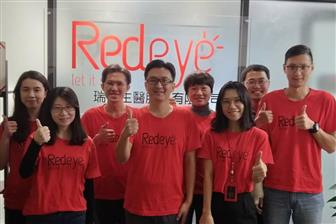