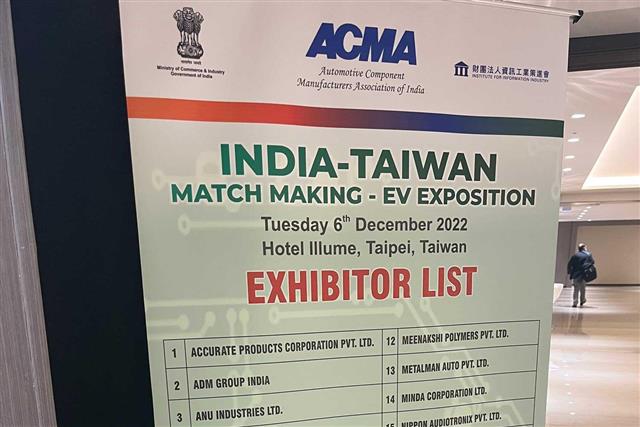 ACMA is the premier body representing interests of the Indian auto component industry. It has more than 850 members and represents 85% of India's automotive industry turnover.

Vinnie Mehta, director general of ACMA, who has been serving in the association for more than 12 years, said "engagement between India and Taiwan has increased tremendously over the last several years."

"Electric mobility is another opportunity for us to knock on the door and we should make good use of it. That's why we got 22 companies here, and we will keep this effort," he said.

India has been providing a wide range of subsidies for the local automotive industry - from FAME to PLI schemes - pumping high momentum into the manufacturing of electric vehicles (EV) from scooters, three-wheelers, taxis and buses.

Supplying to more than 50 international OEMs including Mercedes-Benz, BMW, Volkswagen, General Motors, Ford and a number of local OEMs, such as Mahindra & Mahindra and Tata Motors, the automotive industry is growing to be one of the largest GDP contributors in India, generating 6-7% of the GDP, and providing up to 35 million job opportunities, said Mehta. India sells 75,000 units of electric two-wheelers every month, according to ACMA.

India has the fourth-largest automotive industry in the world, so combining such market potential and technologies brought by Taiwanese suppliers could be a win-win situation, Mehta said.

There are already big companies such as Foxconn and Wistron operating in India. Second-tier Taiwanese suppliers are encouraged to learn from the big companies and can therefore adapt to the business culture in India pretty fast. "Once they're across the threshold, they will be up and running," said Mehta.

Indian suppliers are able to directly come and connect with Taiwanese suppliers to cater to both the domestic demand in India and the external demand from Europe and the US, whereas other Asian OEMs usually stick to their own closed-loop supply chain.

Another important factor that makes India attractive is India's huge engineering skillset, so companies will not have to worry about IP violations, and they can always find a robust recourse system to help them solve issues, Mehta said.

In terms of sales growth, Mehta said India's automotive industry has a headroom for growth that is at least three times bigger than that of China. Notably, possessing a car is a symbol of status in India. As a developing country, everyone is striving for better living standards and better products. A lot of people are moving from rural to urban areas; demand for housing and transportation will be huge.

Mehta added that India's economy is an ecosystem on its own where the impact caused by volatility in the global trade or the worldwide macroeconomic conditions remains minimal. The local supply chain is significantly supported by domestic demand.