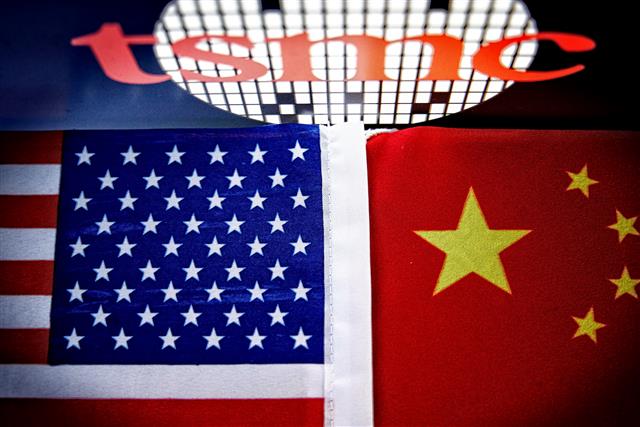 Year 2022 marks a new height of the US-China chip war, with the US government imposing unprecedented sanctions against China's semiconductor sector. As the year draws to a close, many are left to wonder: what lies over the horizon of 2023? How will the chip war impact key players in the global chip industry, especially ASML, a linchpin in the semiconductor upstream, TSMC, the world's leading foundry, and SMIC, China's most advanced foundry?

Fast forward to 2022, in August, the Bureau of Industry and Security (BIS) under the US Department of Commerce introduced export controls on the wide bandgap material Gallium Oxide and diamond substrate used in high voltage power devices, in addition to export controls on Electronic Computer-Aided Design (ECAD) software designed for gate-all-around field-effect transistor (GAAFET), a transistor structure necessary for process nodes at 3nm and 2nm.

In October, the BIS introduced a wide range of restrictions which, above all, extended export controls on items destined to semiconductor fabrication facilities in China, stating that the licenses for China-owned facilities will face a presumption of denial while those for facilities owned by non-Chinese multinationals will be decided on a case-by-case basis. The items include logic chips with non-planar transistor architectures (FinFET and GAAFET) at 16/14nm or below, DRAM memory chips of 18nm half-pitch or less, and NAND flash memory chips with 128 layers or more.

In addition, the BIS also restricted US persons from supporting the development or production of ICs at China-based fabs without a license, while adding certain high-performance computing (HPC) chips to the Commerce Control List. To minimize the short-term impact on chip supply chain, a Temporary General License (TCL) was established to allow specific, limited manufacturing activities related to items destined for use outside the PRC.

ASML: US pressure piling up

On the other side of the continent, the Dutch government has not granted a license to the Dutch lithography equipment maker ASML to ship extreme ultraviolet (EUV) lithography machines to China since 2019, therefore posing a major challenge for the Chinese semiconductor industry to progress into technology nodes at 7nm and beyond. Following the US sanctions in October, much attention is now focused on whether or not the Dutch government will yield to US pressures to restrict DUV sales to China.

As revealed during ASML's Q3 2022 investor call, its shipment demand in 2023 is still significantly above the company's shipment and build capacity next year, driven by lithography investments in support of capacity additions, technology transitions and the governmental investments in pursuit of technology sovereignty. With China only accounting for 15% of ASML's system sales as of third-quarter 2022, the company sees limited impacts on its 2023 shipment plan. Nevertheless, ASML believes that the inability of other equipment suppliers to ship their systems would indirectly impact 5% of its backlog, based on the estimation that some purchase orders from Chinese fabs in ASML backlog will soon meet the technology criteria in the new US export controls restriction.

Overall, ASML's own estimations suggest that there is limited US technology in ASML's systems, even though the excimer lasers used in the DUV are provided by the American company Cymer. Notably, ASML believes that it doesn't need an export license to ship US origin spare parts to most customers in China that are working on mature nodes, especially when ASML business in China mainly deals with mature nodes. In the worst case scenario that sees ASML barred from supplying advanced China-based fabs, the company believes that the gap can be filled from elsewhere as demand exceeds supply. DIGITIMES Research estimates that ASML will ship 60 EUV units in 2023, and between 80 to 90 units of high-numerical aperture (high-NA) EUV equipment in 2025.

According to Frans-Paul van der Putten, a senior research fellow at the Netherlands Institute of International Relations Clingendael and an independent consultant at ChinaGeopolitics, it will be very hard for the Dutch government to resist if Washington continues to exert heavy pressure on it, noting that Washington has to get Japan and the Netherlands to align themselves with US sanction measures before imposing further sanctions against China.

Macroeconomy, a bigger concern to the foundry industry

According to DIGITIMES Research, the global foundry industry will see revenues reaching US$137.2 billion, a year-on-year growth of 25.8% attributed to capacity expansions, rising foundry prices, and long-term contracts. However, as the trend of inventory adjustment will likely persist into first-half 2023, and possibly beyond, as a result of consumer demand dampened by macroeconomic factors, DIGITIMES Research forecasts that the foundry industry will see revenues decline by 2-3% in 2023.

In the mid-to-long term, however, several factors will contribute to foundry market growth worldwide. These factors include the growing 5G penetration rates and HPC demand, the increasing electrification and digitalization of automobiles, the trend of moving IC designs in house as IDMs continue to outsource chip manufacturing to foundries. Consequently, DIGITIMES Research estimates a Compound Annual Growth Rate (CAGR) of 8.3% for the global foundry industry between 2022 and 2027, with the industry seeing revenues up to US$200 billion in 2027.

For Taiwan Semiconductor Manufacturing Co. (TSMC), spillover effects from current US sanctions against China will be limited.

According to DIGITIMES Research, since the chips under sanctions belong to a niche sector, and other HPC-related chips not covered by US sanctions can still be outsourced to TSMC and other foundries, as long as the end-users of the chips concerned are in compliance with US regulations. As TSMC CEO C.C.Wei described during the company's Q3 earnings call, "The new regulation set the control threshold at very high-end specification, which is primarily used for AI or supercomputing applications." Furthermore, TSMC has already received a 1-year authorization from the US to continue the shipment of US-made equipment to its Nanjing fab, covering both 28nm and 16nm process technologies.

All in all, TSMC still sees 2023 as a growth year, impacted mainly by cyclical rather than structural challenges. In its earnings call for Q3 2022, the foundry noted that supply chain inventory had peaked in the third quarter and would affect fab utilization rates in first-half 2023. In particular, weakness in the smartphone and PC markets will also impact N7 and N6 utilizations. Nevertheless, the foundry expects supply chain inventory to return to a healthier level in second-half 2023, driving up N7, N6 demands again. As of third-quarter 2022, TSMC's 7nm family contributes 26% of TSMC revenues, while smartphones and HPC respectively contribute to 41% and 39% of TSMC's revenues.

For 2023, TSMC also expects a smooth ramp for its latest, most advanced 3nm technology, which already entered volume production in the third quarter. N3 is expected to be fully utilized in 2023 and contribute a mid-single-digit percentage of TSMC's wafer revenue in 2023. Meanwhile, N3E volume production is scheduled for the second half of 2023.

Nevertheless, despite the support of smartphone and High-Performance Computing (HPC) applications, which sustain TSMC's momentum to ramp up N5, the foundry doesn't rule out inventory adjustment in the hitherto steady data-center and automotive end market segments.

A blow to Chinese semiconductor industry

Being the spearhead of the Chinese semiconductor industry, SMIC has been particularly targeted by US sanctions. After Washington restricted the export of semiconductor manufacturing equipment capable of producing chips at 16/14nm and below, SMIC's 14nm process, which went into volume production in fourth-quarter 2019, is undoubtedly directly impacted. Apart from SMIC, the Shanghai-based Huahong Semiconductor has recently claimed a breakthrough in 14nm research, but the current sanctions have pushed both back into 28nm technology.

As revealed at SMIC's Q3 2022 earnings call, the foundry has found itself in a crossfire of macroeconomic dynamics and geopolitical shocks. The second half of 2022 is already marked by high inflation and weak demand in the mobile and consumer market, only to be further complicated by US sanctions. According to SMIC, some of its customers need time to interpret the latest US export control rules, and the company expects revenue in Q4 to decline by 13-15% sequentially, with capacity utilization rates also declining. Measured by 8-inch equivalent wafers, SMIC's utilization rate has already declined to 92.1% in Q3 2022, compared to the previous quarter's 97.1%. In Q3 2021, utilization rate was 100%.

As for China's leading memory manufacturer Yangtze Memory Technologies Corp. (YMTC), its capacity expansion plan was disrupted by the sanctions. YMTC has a capacity of 100,000 wafers, and was originally expecting to boost the number to 150,000 wafers in 2023. Furthermore, despite claiming to have successfully developed 232-layer NAND, verifying its yield will be difficult without the equipment for volume production.

In fact, reduced capacity expansions from chip champions like SMIC, YMTC and CXMT, which together accounted for approximately 50% of domestic demand for semiconductor equipment, will also impact the country's homegrown equipment manufacturing industry. A YMTC engineer indicated that the company had turned to domestic equipment in response to US restrictions, but would opt for Japanese and other non-American alternatives in areas where domestic suppliers underperform.

For China's semiconductor industry, the ban on US persons supporting Chinese IC development and production is also disastrous, denting Beijing's efforts in recent years to attract talents, many of them holding US citizenship or permanent residency rights.