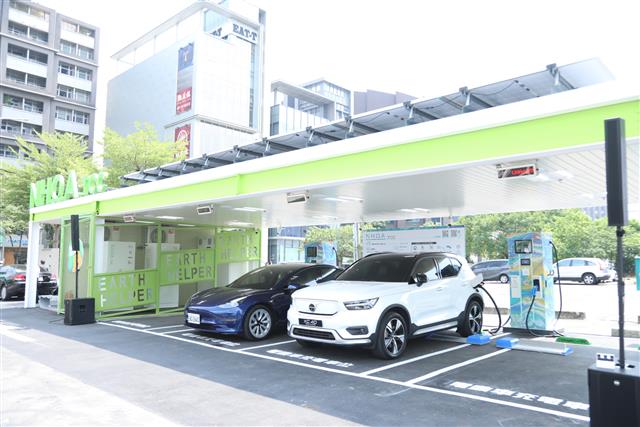 NHOA.TCC, a subsidiary of Taiwan Cement, inaugurated on July 27 an EV charging station in Taipei City. It is Taiwan's first DC/DC charging station that integrates solar power while serving as an energy storage system.

The charging station is also the first one that implements differential charging rates, with peak-hour rates four times higher than off-peak hour rates. Besides, EV drivers can make charging appointments via the communication app Line.

The EV charging station consists of two charging piles compatible with CCS1, CCS2 and CHAdeMO standards, and entails an investment size between NT$28-32 million (US$0.95-1.08 million).

Empowered by a smart energy management system, the energy storage system has a capacity of 145KWh, with high-end ternary lithium ion batteries produced by E-One Moli Energy, also a subsidiary of Taiwan Cement.

The energy storage system functions as a buffer between the EV charging station and local power grids, as it draws power from local grids during off-peak hours, and discharges electricity to EVs during peak hours to reduce the burden on grids.

According to Taiwan Cement chairman Nelson Chang, the demands for renewables and energy storage capacities have been on the rise among Taiwanese industrial users, driven by the global initiative RE100 in which corporates are committed to going 100% renewable. Right now, the Taiwanese government targets a total installation capacity of 27GWh for renewables by 2025. For Taiwan to efficiently deploy green energy, Taiwan Cement noted that a storage capacity amounting to 20% of total green energy generated would be needed. In other words, at least 5GWh of storage capacity should be installed by 2025.