In a world where "money is cheap," unicorns, the companies with a valuation of more than $1 billion, are born in an accelerated mode during the COVID-19 pandemic era.

There are already 860 unicorns as of the second quarter this year, and likely to top 1,000 next year, according to Eric Huang, VP of DIGITIMES at the beginning of Asia Venturing IV webinar, co-hosted by Anchor Taiwan and DIGITIMES, on the topic of "How global unicorns leveraged Asia from zero to exit."

Where would the next unicorns come from? "Definitely in Southeast Asia, there are quite a lot, and I feel it is possible that the next one will be coming from Taiwan," said Christine Tsai, CEO of 500 Global.

"In terms of sectors, which can be very differentiative for Taiwan, we are finding really strong deals in digital health, security, SaaS, deep-tech," said Tsai. She also added that whether those companies can become unicorns depends on whether they are targeting the broader Asia or the global market.

"Certainly, in Korea as well," said Tsai. "There are lots of macro factors that are influencing and accelerating new unicorns emerging in East Asia. It is really exciting."

How unicorns can leverage Asia for expansion

Unicorns can be enabled by their supply chains. Head of Asia at RISE Casey Lau, the moderator of the event, touched upon the fact that 500 Global has set up an accelerator with the municipal government of Kobe, Japan, inferring that Asian governments create startup ecosystems to foster entrepreneurship. While increasing their opportunity to succeed, they also serve as a catalyst of economic development and job opportunities.

Latch's Taiwan GM Cheney Wang said the PropTech company leveraged the agile and flexible supply chains in Taiwan and China for the hardware manufacturing they need for their solution.

In addition, many unicorns also got financial support from Asian investors, such as Softbank, and corporate venture arms from multinational conglomerates such as Toyota, Mitsubishi, etc. Richard Koo, principal of DNX Ventures, whose teams are based in the Bay Area and in Tokyo, explained that the bubble burst in the 1990s caused asset prices to start a long-term slide. 25 years later, Japanese corporates then stashed lots of cash. Those corporations were looking around to find ways to do with that cash. "There isn't a culture for dividend payment for Japan, nor M&As, while many of them wanted to catch up with innovation capabilities of American companies such as Boeing and GE, so they started to pour money into corporate venture capital." Koo has just raised a $300 million fund, mostly from Limited Partners which are large corporate venture arms of multinational firms in Japan.

Global unicorns are also inspired by Asia. While some of the innovations in Asia such as short-form video streaming and KOL marketing became inspirations for Western startups, there are also signs that the technology gap between the US and Japanese software has been shrinking dramatically.

Having built up a Japanese ecosystem of startups and helping them to navigate what American startups had gone through 5 years from now, Koo said Japanese startups can execute brilliant ideas and grow.

Valuations are pushing larger and bigger; unicorns are not that special anymore. "Definitely unicorns and decacorns are coming out of Asia, and that is going to increase over the next many years," said Tsai.

(Editor's note: Asia Venturing is a series of monthly roundtables with roadmaps to the future focusing on the hype v.s. the reality of Asia's supply chain-boosted innovation ecosystem, jointly powered by Anchor Taiwan and DIGITIMES. We bring together leading industry luminaries, corporate strategists, experienced investors, and entrepreneurs to expand your network and redefine the possibilities of cross-border opportunities. The replay of the latest session can be seen on Anchor Taiwan or DIGITIMES) 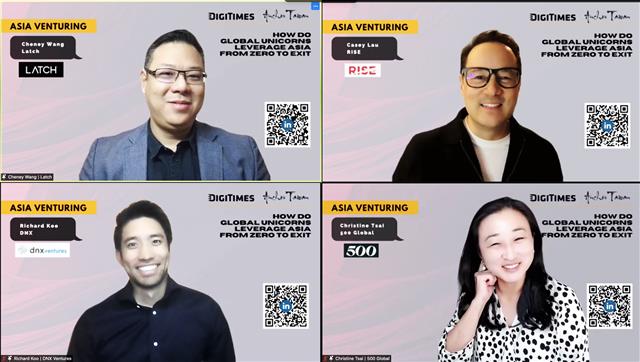