India's per capita income is far lower than China's. Raw materials such as steel, coal and cotton are produced in India and shipped to China with processed products sold back to India. China's mobile phones, TVs and various commodities are sweeping the Indian market, with a trade deficit of more than US$50 billion a year in favor of China, partly fueling the tensions between the two countries.

Each state has its own way

India is a country with a good geographical location, rich history and cultural diversity. Foreigners may find it difficult to understand the country.

Before the British colonized India in 1858, parts of India were under Portuguese rule for a long period of time, and the Portuguese-ruled Goa was not annexed to India until 1961. There still exists a fundamental difference between India's nominal unity and the reality.

There have been vociferous calls for independence from Tamils in the southeast of India. Seven impoverished states like Assam and Darjeeling are located in the northeastern mountains. There are northwestern border disputes with Pakistan and China. Modi's hometown, which is in one of the states with the best economic and trade conditions in India, is as prosperous as China's Jiangsu and Zhejiang regions. But located on the border with India and Pakistan, Gujarat state has been suffering endless ethnic and religious disputes. Muslims account for 20% of the city population in the Hindu holy cities of Kanpur and Varanasi on the Ganga River. The disparity in races, religions, and languages, coupled with the inadequate educational environment, has resulted in multiple areas of divergence. India's ruling class or ruling party always believes that centralization is the sole approach to effectively govern the whole India. Under these national contexts, the different industrial development strategy and incentive policies developed by each state often fail to coincide with the central government's anticipation. States tend to compare their policies with the others', coupled with the different conditions of the states and very intricate political spectrums involving central and local governments, with the whole country stranded in a chaotic bureaucratic system.

I've been to India nearly 20 times, and I've always come up with something each time since my first trip to India in 1992. But I've always been puzzled by the diversity of India. DIGITIMES Research recently studied the markets of the two-wheeled, three-wheeled and four-wheeled vehicles in India in a bid to understand the opportunities of electric vehicles (EV) in the country. The study echoes my understanding of India. My past experiences in studying specific topics about India were mostly confined to a limited research scope, lacking in-depth analysis. My previous study may have offered some insights and ideas helpful for the Taiwan government's strategic planning, but information and analysis for enterprises' decision-making still require more systematic and comprehensive research.

DIGITIMES Research undertakes research on EVs to explore strategies of penetrating the Indian market, studying how business opportunities could be available to foreign enterprises in the field of smart applications. These data, coupled with my practical experience in India, can provide some useful references to the business community.

We can divide the Indian EV market into three market segments: two-wheeled, three-wheeled and four-wheeled vehicles. We explore various modes of cooperation and business opportunities possible for telecommunications and information service providers. 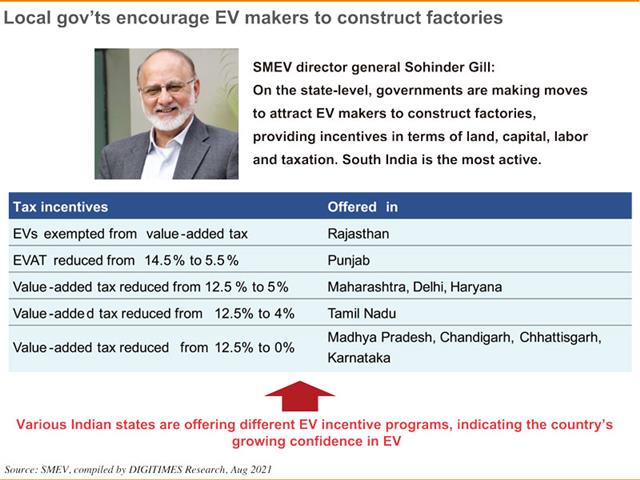