Strong shipments for Chromebooks boosted revenues at Elan Microelectronics, which specializes in touchscreen controller chips and fingerprint sensors, in December. The fabless chipmaker saw its revenues for all of 2020 surge over 50% on year.

Elan reported consolidated revenues of NT$1.68 billion (US$59.53 million) for December, up 10% on month and 98.8% on year to reach the second highest monthly level ever.

As the stay-at-home economy will continue fueling demand for notebooks, shipments of notebook chips are expected to pick up further in the first half of 2021 and benefit suppliers such as Elan.

With Chromebook shipments having nearly doubled on year in 2020 thanks to robust orders from the education and government procurement segments, some market observers believe Chromebook orders for 2021 will have a good chance to more than double on year as well.

Elan's consolidated revenues for full-year 2020 were NT$15.1 billion, up 59.2% on year. The company's visibility of orders has already reached the end of second-quarter 2021 and its chip prices and gross margin are also expected to increase with upstream semiconductor sectors mulling price hikes. 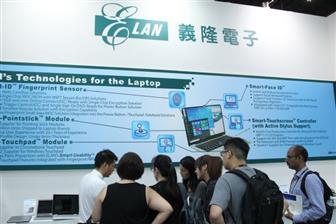