The government of Taiwan's Yunlin County will operate EZ10, a Level 4 autonomous-driving electric shuttle bus produced by France-based Ligier, for public transportation in a green energy park under development and other sight-seeing spots in coastal and downtown areas.

EZ10 underwent road trial run in Taipei in August and in Kaohsiung in October 2017. EZ10 has six seats, plus room for another six standing passengers. At full power charging, EZ10 can run for 10 hours at an average speed of 20-25km/hour. 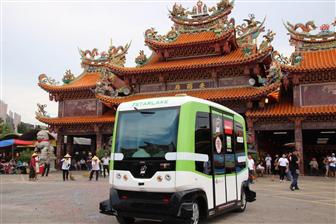 EZ10 in the front yard of a famous temple in Yunlin
Photo: 7StarLake

Tags
ICT manufacturing IT + CE Shuttle Software, big data Taiwan
Companies
Shuttle
Looking for startups?
Startup database
Profiles of startups from Taiwan and around the world: their technologies, product developments, fundraising rounds, etc. All startups are welcome to register their profiles - free of charge.
Register
Accelerators & incubators
Information about accelerators and incubators from Taiwan and around the world that are mentoring startup businesses and teams. All mentors are welcome to register their info - free of charge.
Register
Events calendar
Major events, including those organized by the government, DIGITIMES, and others, featuring startups, innovative technologies and products from Taiwan, Asia and around the world.
Supply chain