Digitimes Insight: CMI to be top Taiwan supplier of large-size panels in 2Q11

Chimei Innolux will be Taiwan's top supplier of large-size TFT-LCD panels in the second quarter by shipping 32.11 million units, followed by Au Optronics (AUO) with shipments of 30.66 units.

Taiwan-based panel makers will ship an estimated 71.28 million large-sized (over 9 inches, including for use in tablet PCs) panels during the second quarter of 2011, rising by 9.4% on quarter and by 1.6% on year and accounting for 40.3% of global total, according to Digitimes Research.

Besides CMI and AUO, the other Taiwan-based suppliers of large-size panels are Chunghwa Picture Tubes (CPT) and HannStar Display. 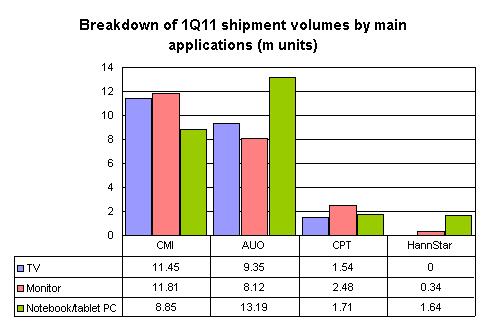