Looking at TFT LCD equipment supply, although South Korea has improved its own equipment production capability in recent years, it still relies heavily on Japan for PECVD, sputter units and steppers.

Out of all the TFT LCD array equipment companies in Japan, Nikon and Canon, which dominate the stepper market, were particularly hit hard by the March 11 earthquake, and could send ripple through out the global TFT LCD equipment supply chain. Japan is the largest producer of LCD-use steppers.

Nikon represents 50-60% of the worldwide stepper market, and Canon about 40-50%. Nikon and Canon shipped 45 and 38 developers in 2009. The two companies have virtually monopolized the global market.

Nikon's and Canon's LCD stepper plants are located in areas stricken by the earthquake. The facilities have sustained structural damage and are experiencing power outage that has halted production operations. The two companies still have no precise schedules on when production can resume.

Nikon is currently the leader in small- to medium-size LCD steppers. Its subsidiary Miyagi Nikon Precision supplies small-to-medium-size TFT LCD steppers for smartphones. It has previously planned to build a new facility nearby and commence production in July. However, due to the earthquake, the expansion plan has been moved back, and will likely impact the schedules of Japan and South Korea panel makers for expanding smartphone-use panel output.

Canon also has production plants throughout Japan. The locations affected by the earthquake are the offices in Utsunomiya, Ami and Toride. Schedules for resuming operations are undetermined due to power outage, building damage and production shutdown.

The Utsunomiya office is responsible for the research and development of LCD steppers and houses a research center. The Ami office, which mainly produces steppers, will affect production and shipments. Toride mostly manufactures imaging business machines.

With LCD panel makers resuming capacity investments in the second half of 2009, Canon saw its stepper shipments rise from 38 units in 2009 to 56 unit in 2010. The company's target set prior to the earthquake was 38 units in 2011.

In addition, China now houses a large percentage of the world's new TFT LCD production lines. With many facilities based on 7G or above technologies scheduled to begin volume production in the second half of 2011 to 2012, Digitimes Research believes that TFT LCD companies that need steppers will likely see delays. 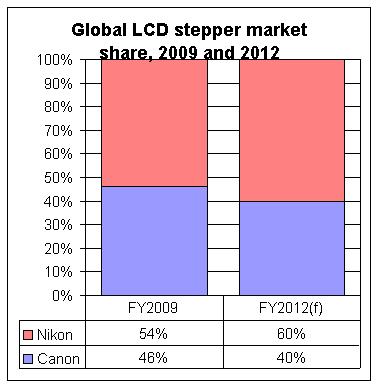 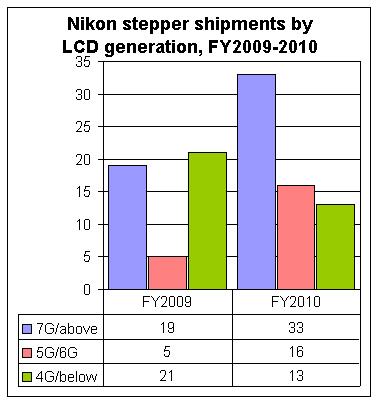 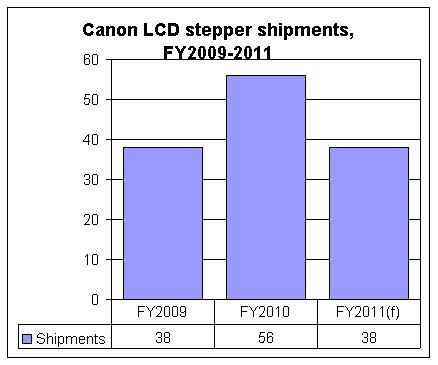