These are also the first server and workstation chips based on Intel's 32nm logic technology, which uses the company's second-generation high-k metal gate transistors to increase speed and decrease energy consumption.

The Intel Xeon 5600 series processors support up to six cores per processor and deliver up to 60% higher performance than the 45nm Intel Xeon processor 5500 series, Intel noted.

Data centers can also benefit from the power efficiency of the Intel Xeon 5600 series as the series' Xeon L5640 processor can deliver the same performance as the Intel Xeon X5570 processor, which is the top-end model of the previous series, but with up to 30% lower platform power, Intel pointed out.

Intel's AES-NI technology is a new set of instructions that accelerate AES performance to enable faster data encryption and decryption for a wide range of applications such as database encryption features, full disk encryption and secure internet transactions.

Intel's TXT technology will provide added security that cloud environments have been waiting for by enabling a more secure platform launch environment, along with providing more protection for applications that move between virtualized servers. Hardware-based capabilities integrated into the processor shield against malicious software to allow important applications and data to run more securely in a virtualized environment.

The frequency-optimized quad-core version of the Intel Xeon 5600 series peaks at 3.46GHz with a TDP of 130 watts, while the six-core version reaches 3.33GHz with a TDP of 130 watts. Advanced six-core versions will top out at 2.93GHz and TDP of 95 watts, and the standard quad-core processor will reach 2.66GHz at 80 watts. Low voltage versions of the chip will have TDPs as low as 60 watts and 40 watts and feature six and four cores respectively.

In addition to enterprise-class processors, Intel also launched four unique processors for the embedded computing segment, including the first six-core processors, the Intel Xeon E5645 and L5638, the quad-core L5618 and E5620 processors. These processors, featuring 7-year lifecycle support, are built for thermally constrained and robust communications environments, and will route applications more quickly and efficiently between connected devices. 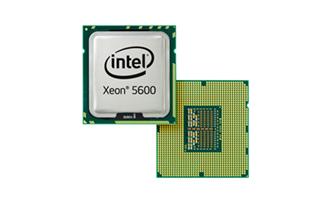