ATI XGP capitalizes on PCIe 2.0 to deliver graphics via a connected cable to an externally powered and cooled device, delivering up to 4.0Gb/s bandwidth in each direction between the notebook and external graphics. XGP is fully optimized for new AMD Turion X2 Ultra (Puma) notebook platforms, which AMD also announced.

According to AMD, ATI PowerXpress users can double or triple the performance of the IGP when plugged into a wall socket or extend their battery life by over an hour while on the go.

ATI PowerXpress features can also be accessible and user configurable via the Catalyst Control Center. The first notebooks to take advantage of ATI PowerXpress are available from Fujitsu-Siemens Computers, AMD said.

Notebook vendors including Taiwan-based Acer, Asustek Computer and Micro-Star International (MSI) are all planning to release products based on the new platform. 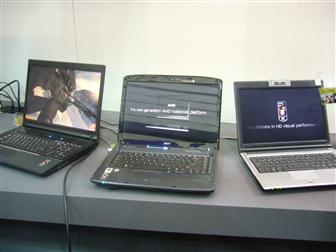