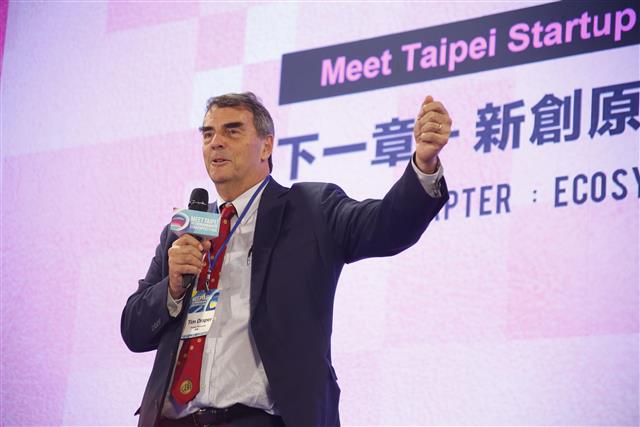 Silicon Valley VC Tim Draper stated in his visit to Taiwan that the threat of war won't affect startups, using Israel as a prime example. He also pointed out China's strict controls have made it no longer suitable for investment. According to reports, Draper is closely following space technology investment opportunities these days and has visited Taiwan's National Space Organization (NSPO).

At the Meet Taipei Startup Festival, Tim Draper mentioned that he hopes to spread the spirit of entrepreneurship and venture capital to the whole world. He's already visited many Taiwanese entrepreneurs during this trip, and he believes that some of them are on the same level as Silicon Valley entrepreneurs.

He invested in China when Deng Xiaoping was in power. In recent years, he saw how the Xi Jinping regime's strict political and financial control drove away Chinese talents to places like Singapore. He emphasized that entrepreneurs need freedom; they need to do what others wouldn't dare to do.

Draper stressed that Taiwan already has major corporations like TSMC and Foxconn that could support the entire economy, creating the environment for many startups to rise. He also mentioned that the digital virtual world is highly flexible and won't be limited by geography.

Taiwan has long faced the threat of war. However, this kind of threat won't affect Taiwan's entrepreneurial energy. Take Israel for example; the country has faced war threats for centuries, yet it has cultivated a staggering number of tech unicorns.

Taiwan has a good startup environment and a highly educated population. He believes that foreign investors will find many outstanding entrepreneurs if they're willing to be open-minded. Vice versa, Taiwan should also focus on attracting global talent to invigorate the ecosystem.

In a recent interview with Reuters, besides reiterating his stance that China is no longer suitable for investments, he also stated that he's paying more attention to investment opportunities in the space technology sector these days. On November 14, he visited the NSPO located in Hsinchu Science Park.

The NSPO has confirmed the news about Tim Draper's visit. On that day, he was greeted by NSPO director general Jong-Shinn Wu. Wu explained to Draper about NSPO's past and future satellite plans. He also expressed interest in the R&D energy and maturity of Taiwan's space technology.

Tim Draper is a legendary Silicon Valley venture capitalist, as he was an early investor in companies like Tesla, SpaceX, Skype, Baidu, Twitter, and more.

Categories
IT + CE Software, big data
Tags
commentary DeepTech startup Taiwan Tim Draper venture capital
Share this article
Other links
Print
Related stories
Qualcomm startup competition winners leverage AI for diverse applications
Foxconn chairman becomes first Taiwanese entrepreneur to speak at B20 summit
Related topics
Startups and innovations
Global supply chain: Advanced economies
Opinions
Innovations
Innovations
Opinions
Looking for startups?
Startup database
Profiles of startups from Taiwan and around the world: their technologies, product developments, fundraising rounds, etc. All startups are welcome to register their profiles - free of charge.
Register
Accelerators & incubators
Information about accelerators and incubators from Taiwan and around the world that are mentoring startup businesses and teams. All mentors are welcome to register their info - free of charge.
Register
Events calendar
Major events, including those organized by the government, DIGITIMES, and others, featuring startups, innovative technologies and products from Taiwan, Asia and around the world.