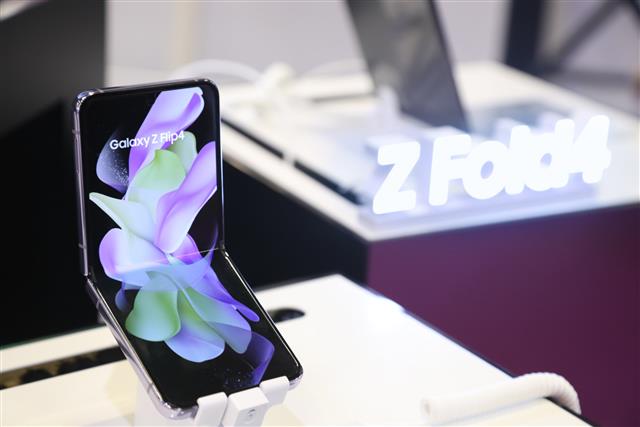 Samsung Electronics is trying to direct the mainstream of the handset market towards foldable phones, hoping to increase the unit price of sales, and to drive its own production of OLED panels. Samsung is expected to sell more than six million foldable phones in the third quarter of 2022, and will sell panels to other handset manufacturers - this is Samsung's usual strategy.

However, the proportion of low-end phones in Samsung's product portfolio is not low. According to UBS estimates, of Samsung's 2022 handset sales, nearly 60% will be low-end sub-US$ 200 devices, and almost 30% will be high-end models priced over US$300 high-end with shipments of about 74.5 million units. The rest will be midrange handsets between US$200-300.

The handset division's profit contribution to the Samsung group as a whole is estimated to drop from 26% in 2021 to 22% in 2022, and the profit of the entire handset division will decrease by nearly 20%. In addition, the profit of the consumer electronics division will also decrease from KRW364.4 billion to KRW200 billion, a drop of more than 40%.

This is a big warning for Samsung, which used to rely heavily on high-specification components and premium market positioning to boost revenue from key components. But amid economic downturns, the key contributors to past successes will most likely become a burden of over-investment that cannot be gotten rid of.

It is expected that Samsung will try to maintain a minimum profit of KRW2.8 trillion in a memory division for which business strategy is difficulty to adjust. China's YMTC already has reached 192 layers for its 3D NAND and is expected to have a market share of more than 5% in 2022, which will be a threat to South Korea's memory giants. Samsung is relying on strategic partners such as UMC for its mature processes, while focusing in-house efforts on advanced processes to maintain its memory competitiveness.

It is not easy to achieve breakthroughs in market share in the high-end handset segment. Samsung's foldable devices and OLED panels will be the focus. Production of low-end and midrange are being outsourced, and Samsung is probably making preparations for producing them all at overseas plants. According to DIGITIMES Research, of Samsung's shipments of 270 million handsets, about 50 million units are outsourced to the Chinese industry, and Taiwan's supporting factories also benefit. It is not just the low-end cell phones; other segments, including industrial control applications and network equipment may also see expanded outsourcing or procurement from outside sources. The relationship between Samsung and Taiwan makers is also beginning to enter a new era. Is Taiwan ready?

In the display field, OLED may beat miniLED, and Apple wants to foster LG Display (LGD) and BOE. Samsung's handsets once accounted for two thirds of the company's profits. The semiconductor boom has helped maintain Samsung's overall profitability despite the weakening mobile communications (cell phone) division.

However, the present semiconductor boom seems to have reached the end, with memory falling first and Micron and YMTC eyeing more market shares. Samsung's plant in Xi'an, China, which contributes 40% of the company's flash memory capacity, is now a "hostage" under the proposed Chip 4 framework. With 60% of its semiconductor exports going to China, South Korea relies more on the Chinese market than Taiwan does, leaving Samsung to bear the brunt of geopolitical conflicts.

Samsung is eyeing the foundry sector, but it is facing a high barrier formed by TSMC. The high barriers give TSMC structural advantage in the foreseeable future. It is easy for Samsung to overcome that barrier; there is a higher possibility that Samsung may fall in its attempt climb over that barrier.