Robotaxi services progressing in the US and China 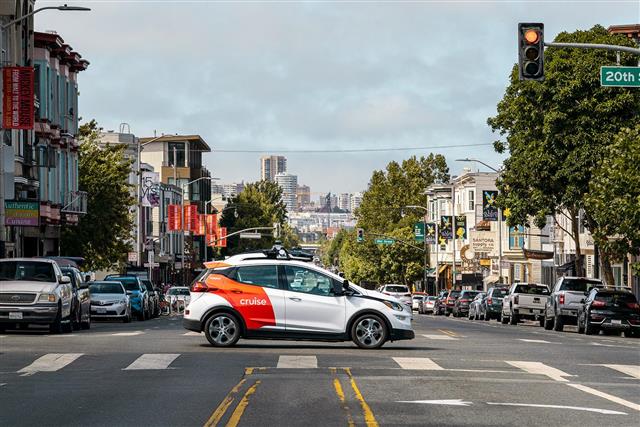 The reality of commuting with robotaxis has come closer. Cruise, a GM-owned self-driving car company, began charging for its driverless taxi rides in part of San Francisco. Two months earlier, autonomous vehicle (AV) technology companies Apollo and Pony.ai received approval for operating their self-driving taxi services without a safety driver in a suburb of Beijing.

Cruise obtained permission from the California Public Utilities Commission in early June to launch the paid ride service offered through 30 vehicles (EVs). According to Electrek, the company got its first fare on June 22.

The program currently covers a third of San Francisco in the northwest and only runs between 10 pm and 6 am. In an interview, Kyle Vogt, Cruise's CEO, said that the paid service would expand to cover all of the city with hundreds of cars as soon as the end of this year.

The CEO also said the price of the driverless taxi is similar to what people can expect from other ride-hailing services and will drop over time.

Waymo, one of Cruise's competitors and a subsidiary of Alphabet, also received permission to offer paid self-driving rides in California but has not launched the service. However, the company has operated the same program in metro Phoenix, Arizona, through its ride-hailing application, Waymo One. The service was open to the public in October 2020.

Autonomous taxi systems also have made progress in China. In late April, Apollo and Pony. AI announced that they would move forward with their robotaxi programs without a safety driver in the car, according to CNBC.

Approval from the Beijing City government allows the two companies to provide the services in the Yizhuang district, covering approximately 23 square miles. While a safety driver is not required, a staff member is still needed in the vehicle.

Apollo is an autonomous driving platform backed by Baidu. According to the company, it will deploy 10 robotaxis without safety drivers in the area and add more than 30 cars later. Pony.ai will operate four robotaxis and scale up the service in the future. Both companies received permission to charge the service in Yizhuang in November 2021.

According to Baidu, Apollo has accumulated testing mileage for more than 21 million kilometers and offered robotaxi programs in seven cities in China, including Bejing, Shanghai and Guangzhou. Besides Beijing, the paid service operates in Chongqing and Yangquan.

Another leading driverless ride provider in China is AutoX, which is backed by Alibaba. In February, AutoX announced that its fleet has grown to more than 1000 vehicles and become the largest in China. It operates in Shenzhen, Shanghai, Guangzhou and Beijing.

Because most car crashes result from human errors, AV technologies are expected to create a safer driving environment. In addition, it could reduce the costs of ride services by not requiring a human driver. For countries dealing with the problem of the aging population, such as Japan, AV can potentially mitigate the shortage of public transportation operators.

Nissan Motor has been testing its driverless ride program in Yokohama, intending to roll out commercial robotaxi services in the future, according to Bloomberg. Passengers can summon a car on an application, embarking and disembarking from 23 pick-up points around the city.

The automaker has conducted a similar trial of an autonomous shuttle in Namie. The town is in Fukushima prefecture, hit by an earthquake and tsunami in 2011.

On the other hand, Honda has partnered with Cruise to build a self-driving taxi program in Utsunomiya City and Haga Town in Japan's Tochigi prefecture. According to Wheels, the duo started to map the two areas in September 2021 and expect to begin testing Cruise vehicles on public roads later this year.