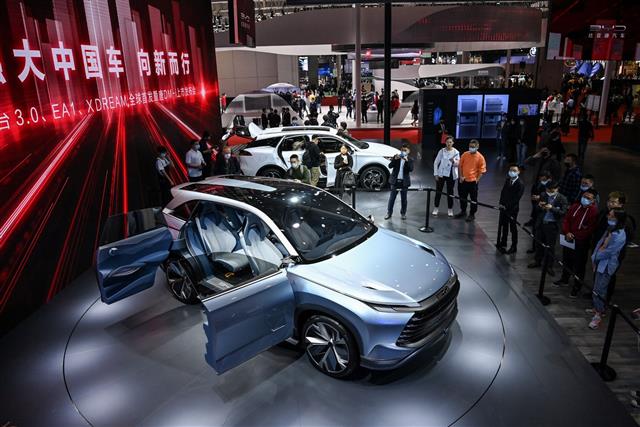 China's homegrown high-end autonomous driving chips have seen a significant breakthrough in commercial applications, as Chinese AI chip startup Horizon Robotics has over the past month cut into the supply chains of both BYD and FAW Group with its latest automotive-grade AI processor, Journey 5, designed for L4 autonomous driving, according to industry sources.

On April 21, Shenzhen-based EV maker BYD entered into a partnership with Horizon, with plans to launch certain models in 2023 adopting the latter's self-driving Journey 5 AI chips, becoming the first company to use the chips in its vehicles.

In mid-May, FAW also announced that its Hongqi series sedans will use multiple Journey 5 chips to build an intelligent driving domain controller, providing 384-512 TOPS (tera operations per second) of AI computing power for the new generation of service-oriented FEEA 3.0 electronic and electrical architecture.

FAW also noted the intelligent driving domain controller will be incorporated into brand-new Hongqi models in 2023, and will be applied to more Hongqi series in the future. Meanwhile, the two parties are also promoting the R&D and application of assisted driving functions based on Horizon's Journey 2 chips, with related cars to be mass-produced in 2022.

The sources continued that many other Chinese carmakers including Great Wall Motors, SAIC Motor and Changan have also signed letters of intent to adopt Horizon's Journey 5 chips in their new EVs.

Horizon has joined Mobileye and Nvidia as the world's three vendors able to mass produce intelligent chips for L2-L4 autonomous vehicles, the sources noted, adding that its Journey series chips sales have amounted to over one million units so far.

Currently, some other Chinese chip vendors are also actively developing autonomous driving chips. Black Sesame Technologies plans to enter commercial production of its HuaShan-2 A1000 series chips in 2022. Cambricon is also set to release its L2+ and L4 self-driving chips in 2022-2023, while SemiDrive is scheduled to launch a 200TOPS automotive processor in the fourth quarter of 2022. And Huawei also has plans to develop high-end autonomous driving chips through its MDC (Mobile Data Center) platform.