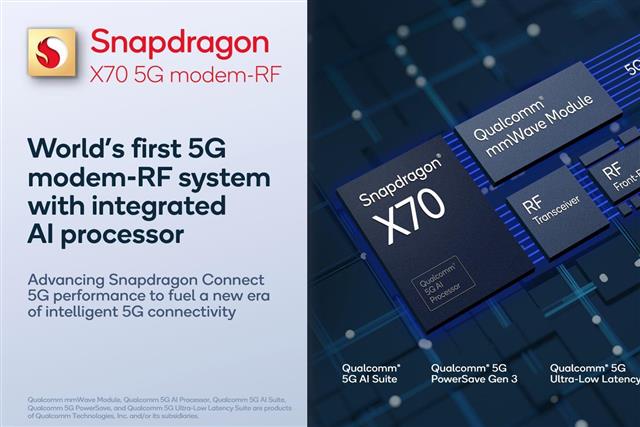 Qualcomm has demonstrated its latest wireless innovations at the Mobile World Congress (MWC), including what it said is the world's first 5G AI processor, as well as a new Wi-Fi 7 platform.

During MWC 2022 in Barcelona, Spain, Qualcomm is showcasing its innovations related to Snapdragon 5G Modem-RF Systems and 5G RAN Platforms for increasing 5G performance, coverage and power efficiency, according to its press release on February 28.

The company also is showcasing its Snapdragon X70 modem, which contains "the world's first 5G AI processor integrated in a 5G Modem-RF System," it said.

According to industry sources, the X70 model might be the last Qualcomm modem used in iPhones, as Apple is seeking to develop its own modems and RF front-end modules. While Apple's plan might not pose a direct threat to Qualcomm's leadership, its move would certainly affect Qualcomm's market share of 5G modems, the sources said.

Meanwhile, many chip suppliers are sparing no efforts in developing Wi-Fi 7 technology, although most network communications companies have said related products might not enter mass production until 2024 and that Wi-Fi 7 would only become mainstream around 2026.

Broadcom and MediaTek have developed demo products for Wi-Fi 7 technology and invited clients and partners to test the products. Broadcom said it would launch related products in second-half 2022 at the earliest.

Qualcomm has announced at MWC that its Wi-Fi 7 platform, FastConnect 7800, would hit the market in second-half 2022 as well, aiming to make it the world's first product with Wi-Fi 7 system-on-chip (SoC).

"FastConnect 7800 helps deliver the world's fastest Wi-Fi - with peak speeds to 5.8 Gbps, which is 60% faster than previous generations. Additionally, FastConnect 7800 features the world's lowest sustained latency - under two milliseconds - making gaming, video calling, and anything else you do online smoother than ever before," Qualcomm said.

Some suppliers suggested that Qualcomm is supposed to be more competitive in touting 5G modems than Wi-Fi technology, where its rivals - Broadcom and MediaTek - are competitive.

Broadcom has worked in the area for a long time, whereas MediaTek is managing to catch up with them. Under the shortage of Wi-Fi SoCs, the company is able to grab additional market share with its faster output and better price-performance ratio of products. MediaTek expects to see great progress of its Wi-Fi 6 routers this year, and its Wi-Fi 7 products are deemed comparable to those of its rivals', according to industry sources.

In fact, Qualcomm's newly unveiled 5G and Wi-Fi products did not come as much of a surprise to MWC observers. Yet, the company's delivery schedules and performances would be viewed as the barometers for the two sectors because an increasing number of companies hope to expand their shares in the sectors.

Qualcomm is obviously adjusting its development strategy. It has been trying to diversify its product portfolio by developing products related to IoT, vehicle-to-everything (V2X), and metaverse. It even said it would not strive for the leadership in the smartphone processors market.