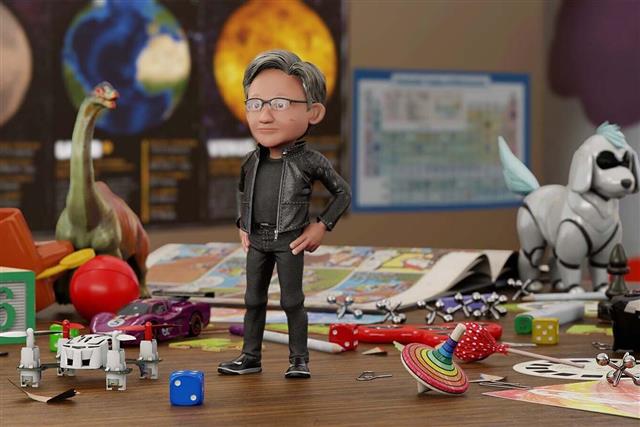 Nvidia CEO Jensen Huang at the recently-held virtual GTC talked about a range of topics and technology development trends, including those associated with the metaverse and its market potential. In a Q&A call hosted by Nvidia for the press based in Asia on November 10, Huang shared his vision for the metaverse era and how his company would fit into the world enabled by the metaverse.

Q: Nvidia has released a set of tools for developers to build 3D virtual worlds. What is your strategy for the metaverse? And how does it differentiate itself from the company Meta's platform.

A: Our strategy with Omniverse is to design the engine, the technology engine, the technology platform. Omniverse is an engine that could be used by every company. And every company will use it in many ways. There'll be many simulations that companies have to do in the car industry or industrial or warehouse logistics. I showed an example of a digital twin of a warehouse with logistics robot moving around inside, being optimized in real time.

Companies in warehouse logistics will be able to use Omniverse with digital twin, for example. Omniverse could also be used by companies who are creating social platforms or consumer platforms and others. But we're not in the business of services. We're in the business of technology infrastructure. So Omniverse is the engine, the algorithms, the mathematics, the computer graphics, the computer systems, the hardware, the system software. That's the focus of Omniverse.

Q: When will the era of metaverse which Nvidia co-defines come? When will it arrive?

A: The metaverse could mean a lot of things to a lot of people, but Omniverse has immediate applications today. That's the reason why there's many developers and customers already working with us on Omniverse. Omniverse is used as a digital twin for simulation, factories, robots, self-driving cars and warehouse logistics.

I imagine large companies having many digital twins or many Omniverse worlds inside their companies that they use for engineering or operations or software development. I highlighted several that Nvidia uses ourselves; we have a digital twin for our self-driving cars. And even when we have several digital twins, we have one for generating data, one for stimulation, one for mapping.

The other application for Omniverse is for collaboration in 3D designs. Omniverse is not only the technology simulating virtual world, but also allows different agents, different people to connect to that virtual world. If you're a digital content creator using Adobe or Autodesk, you could work together like a document in the cloud. Now you have 3D content in the cloud. So the answer is it's now. It's happening right now as we speak.

Q: Will Nvidia provide some user-friendly tools and marketplace for inexperienced end users to create a virtual world and link everything with Omniverse?

A: Omniverse is an engine for simulating virtual world. There'll be many, many Omniverse worlds. During my keynote, I probably showed like eight or nine of them. And each one of those worlds are really different worlds. And Omniverse is designed to be able to create and simulate those worlds at a very large scale.

A: Well, we are focused on the computing infrastructure, the mathematics, and the algorithm of Omniverse. Our platform is open and available to all the world's companies building services and application. And so we're delighted we work with every company in the world in computer graphics, as you know, and we're looking forward to working with the whole industry in creating a Omniverse world.

Q: How do you think Nvidia plans to push the formation or the completion of this whole metaverse industry? Because it's still very new.

A: The fundamental technologies necessary for Omniverse are 3D graphics. But it's 3D graphics very different than video game graphics because video games are created by artists, and most of the content in a video game is pre-rendered. In the case of a virtual world that we create for ourselves, we have no artists. Omniverse has to synthesize the environment, the light, the physics, the collision, the stacking, all of the things that you understand to be the laws of physics, Omniverse has to create it from scratch. It has to do it completely in real time.

That's why Omniverse took so long to create. Video games have been around for 35 years, but yet it took 35 years later for Omniverse to happen.

The second is Omniverse has to, even if it can simulate the reality, it has to be able to scale to extremely large world. Because the world is complicated. And we don't have artists to decide what goes in, what doesn't go in, we have to just create it in as we desire.

The third thing is Omniverse has to have to be a place where AI can be comfortable. And the reason that we need AI in there is because we want to use Omniverse to teach AI robots, like self-driving cars and robots and things like manufacturing robots, speaking robots and avatars. We want to be able to teach artificial intelligence in a safe place. And so Omniverse has to be a good AI's to operate.

Lastly, Omniverse has to have a universal standard, so that it can be connected to all tools. It can be connected by all people. And that's the reason why we chose universal theme description, which was an excellent choice and has now become kind of a Metaverse standard.