The highly anticipated 5G telecommunication technology has features such as high bandwidth, broad data connection, and low latency. Since its advent in 2019, 5G has been viewed as a crucial technology for smart services such as smart cities and smart transportation. However, 5G telecommunication technology has a narrower band signal coverage, compared to 4G. Given that some applied services, such as smart transportation, have extremely high requirements for network latency, telecommunication companies must build a wide range of small base stations to meet the needs of edge computing.

Chenbro's Product Development Project Manager, Lee Yu-Tzu, stated that although the RM252 and RM352 have slight differences in product positioning, they are all specifically designed for the telecommunication industry. First of all, both products adopt the OTII (Open Telecom IT Infrastructure), jointly developed by Intel and China's telecommunication industry, which reduces operating costs and enhances business agility. Secondly, the products adopt a 450mm ultra-short depth chassis design with a dual-processor motherboard that supports the SSI EEB specification. In addition to providing high-performance computing capabilities, it can also optimize space in the data center.

Thirdly, the RM252/RM352 series offer FIO (Front I/O) and RIO (Rear I/O) connection mechanisms, allowing operators to have a full understanding of the devices' operating status at the front end. Operators can also install additional devices. Besides meeting the requirements of different application scenarios, the two products can also reduce operating costs. In order to facilitate the maintenance of equipment, the two products adopt the latest disassembly tool-free design in addition to a dual redundant power supply with built-in hot-swap functions. This not only greatly reduces maintenance time but also improves the reliability of the system. It is worth noting that the two products adopt a flexible fan design, which was designed based on the limited space for microcell base stations and the relatively harsh environments where they are deployed. This design allows the RM252/RM352 to operate normally even in a scorching-hot environment without air conditioning.

Tom Tsai, Project Manager at Chenbro, said that in addition to enhancing the reliability of the products, many components in the two products adopted modular designs. In other words, when encountering unfortunate incidents, such as hardware equipment failures or when needing to install an expansion card, an operator can replace or add components in the shortest amount of time, lowering service interrupted time to the minimum. 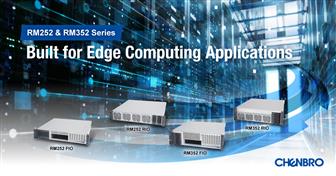