What counts most for innovation startups lies not in business models but in how to serve customers, and therefore startups must work hard to find ways to solve problems for customers and build their product and service differentiations, according to Dan Neary, vice president of Asia Pacific at Facebook.

Neary made the remarks when speaking at the 2018 Global Entrepreneurship Congress (GEC) Plus Taipei, running September 26-29 with the theme of "Enabling Social Impact with AI + IoT." This is the first time for GEC to be held in Taiwan.

Neary said that in the past, automakers saw main competition pressure coming from other peers, but now Apple and Google have become competitors for GM and Ford, totally beyond the imagination of the auto industry. He added that even the on-demand car services offered by Uber and Lyft are posing a great threat to automakers as many people will no longer buy cars.

Based on his observation, Neary noted, there are many companies with low capital expenses, as they do not know how to spend money and make investments. Therefore, he stressed, there is no need for startups to worry about the the sources of funding, and instead they must endeavor to develop solutions to problems, build learning-based organizations, and always know what they themselves and others are doing, if they want to succeed.

Silicon Valley hard to be duplicated

Also speaking at the conference, Jonathan Ortmans, president of Global Entrepreneurship Network, which is helping to run the event, said other countries in the world can hardly succeed in duplicating Silicon Valley, and instead they have to find their own characteristics and positions.

Ortmans continued that there exist many uncertainties in the process of establishing startups, and the most crucial factor for their success is not money but supportive networks. He added that startups must keep thinking about what they can do for customers and how to utilize resources in right places.

Taiwan's economics minister Shen Jong-chin said that under concerted efforts by the government and private sectors, many global tech giants including Microsoft, Google, Amazon, IBM and Cisco have moved to invest and expand their operations in Taiwan.

He disclosed that the government will offer tax incentives and subsidies to encourage more quality international accelerators and startups to station in the planned international startup park in Linkuo, northern Taiwan to further spur the development of cross-domain tech innovations in the country. 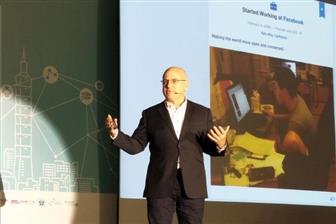