Hsinchu Science Park Bureau (HSPB) is actively pushing forward the Taiwan government's New Southbound Policy, endeavoring to engage efforts across the industry, government, academics and research institutes as well as its sister industrial parks in India in an attempt to help HSP-based companies tap into the India market. As part of such efforts, HSPB recently conducted a panel discussion for a close examination and exchange of views on how Taiwan businesses can expand into India. Experts taking part in the event highlighted that the government should strengthen efforts toward promoting Taiwan's image to give Taiwan businesses a leg-up.

The moderator, Wayne Wang, director general, HSPB, commented that among the New Southbound Policy's target countries, India is of strategic importance in terms of demographics and business opportunities. Amid ever-changing market dynamics, Taiwan has to re-think how to respond to evolving conditions. The government hopes the experts' opinions will help its New Southbound Policy generate more positive outcomes.

MediaTek advisor Grant Kuo, in his opening speech, indicated that MediaTek made a long-term commitment to its operations in emerging markets when the company appointed him as the managing director of MediaTek India 12 years ago. India has a young population, 60% of which is under 25 years old. The country also holds high expectations toward collaborations with Taiwan. The India government has been working with MediaTek to train mobile phone design engineers in the country.

Taiwan needs more high-tech talent and also Indians as long-term partners. Kuo suggests that the Taiwan government provide education opportunities to Indian engineers through National Chiao Tung University (NCTU) and National Tsing Hua University (NTHU) with strong HSP connections. They can offer scholarships to not only Indian graduate students but also college juniors and seniors. When companies hire these students, they can pay recruitment fees to the government, which can then be used to fund the scholarships. This way, government funding is utilized for maximum benefits.

Furthermore, as Indian engineers have different levels of competence, Taiwan should aim to recruit graduates from tier-1 or tier-2 technological institutes in India. It may be difficult for Taiwan to attract first-rate college graduates from world-class enterprises such as Google, Microsoft and Amazon but at least the focus should be on engineers on the next level. If the Taiwan government can put in more efforts toward promoting national image, it will be much easier for Taiwan-based companies to recruit talent.

In addition, the Indian mobile phone market may not be constantly evolving but has indeed shown significant changes in recent years. Taiwan businesses looking to stay on top of local market dynamics should try to gain insight firsthand. However, any Taiwan-based vendor making a visit to India alone will only scratch the surface. If HSP with international prestige can serve as a platform, Taiwan businesses making visits to India should be able to receive a warm welcome.

India market is changing and China has successfully penetrated the market

Digitimes president Colley Hwang, having made more than a dozen trips to India since 1992, gave a suggestion as to the role HSP can play. Two years ago, the No. 1 mobile phone brand in the India market was Samsung, and Micromax was the leading local brand. Now China-based Xiaomi has overtaken Samsung as the market leader. According to IDC, Xiaomi holds the largest share, 30%, of the India smartphone market in terms of first-quarter 2018 sales, followed by Samsung's 25%. None of the top five smartphone vendors is a local Indian brand. Aside from Xiaomi, smartphones from China-based vendors including Vivo, Oppo and Huawei are everywhere in India, pushing local brands such as Micromax and Lava to the low-cost feature phone segment. Most of them are no longer able to compete with China-based phone makers with the exception of Reliance, barely keeping its place by bundling low-cost phones with telecom services.

When Huang visited India two years ago, he met with RS Sharma and Ajai Kumar, two deputy secretaries of Ministry of Electronics and Information Technology and advised them if India did not establish a clear policy to lead the development of its local mobile phone industry, its hands would be tied when China-made phones flooded the India market. Unfortunately, Hwang was right. Now Taiwan-based mobile phone OEM and component makers are coming to India either at the request of Apple or largely for the purpose of working with China-based phone makers.

According to Allied Association for Science Park Industries secretary general Zhi-Yuan Chang, Taiwan businesses should first set a clear strategy before expanding into India. They need to have a specific purpose - to tap into the India market, to make investments or to work with partners. As most Taiwan businesses operate at a limited scale, they prefer to expand overseas with multiple partners rather than do so independently. This is the reason that the association has established a cross-border investment committee in hopes to help its members with overseas endeavors.

NCTU professor Ching-Yao Huang noted the Modi administration has proposed 100 smart city projects, but smart city plans entail a lot of local factors. The Indian students currently studying at NCTU and NTHU will greatly facilitate Taiwan businesses' India market expansion. Taiwan should try to provide them with ample industry information so that they can form a strong bond with the Taiwan industry.

With the government leading the way, HSP creates a platform linking businesses to India

Huang added that government agencies should establish a common agenda exploring business opportunities in India. Due to its diverse cultures and federal system, it is not easy for Taiwan-based companies to have an in-depth understanding of the intricate situations of the India market. HSP should lead the way by serving as a marketing platform on which HSP-based vendors can sell their products and provide their services.

The government's operation toward the India market should start with building up Taiwan's image. HSP can work on promoting the Taiwan high-tech industry as the best partner to India's supply chain. With a positive national image, all undertakings such as talent recruitment, component marketing and consulting services can be more efficient.

Taiwan is undoubtedly India's best partner when it looks to build a handset-centered ecosystem. It is just that both Taiwan and India are taking a wait-and-see attitude. India thinks it is Taiwan's loss if it does not make efforts to tap into India's massive market and the efforts should not be on India's part. However, to Taiwan businesses operating on narrow profit margins, although they do not have to haggle over every penny, they certainly will not risk going into deals without seeing some profit potential. As such, the best way to approach the India market is for the Taiwan government to lead the way by, for example, sponsoring annual conferences of industry organizations such as India Electronics and Semiconductor Association (IESA), Indian Cellular Association (ICA) and Electronic Industries Association of India (ELCINA) or working with renowned local media to keep promoting the Taiwan electronics industry. Such efforts should be aimed to deepen Taiwan businesses' market penetration and attract Indian vendors to proactively seek partnerships. In sum, the steps to Taiwan's Indian operations should be in this order: marketing, selling and manufacturing. That is, before the manufacturing industry makes its move, marketing efforts toward promoting the country and the industry should go first.

Both Huang and Kuo emphasized that as India is a large country, businesses should appoint competent and experienced leaders - not just any managers - to locally head their Indian operations. The Taiwan government, looking to reach deep into overseas markets within the scope of its New Southbound Policy, has to undertake long-term planning and foster independent leaders with regional market expertise. Alternatively, government agencies such as Taiwan External Trade Development Council (TAITRA) and Taipei Economic and Cultural Center in India can focus on building local connections and collaborate with specialists delegated by professional institutes in Taiwan for field visits to India to jointly work toward effective local market operations in the long run.

To help Taiwan businesses with their Indian market operations, HSPB has joined forces with KPMG and Century Development Corporation (CDC) to push forward New Southbound Policy work. CDC has kicked off the construction of an industrial park project near Bengaluru Airport. KPMG, engaging in close collaborations with both Taiwan and India governments, is prepared to offer professional consultation on complex Indian laws, said Winston Yu, chairman of KPMG.

Narendra Modi and his party BJP were able to win the first electoral majority for a single party in three decades partly because he promised to reach a challenging goal in the previous Indian national election. Four years later, BJP thinks it has delivered a generally satisfactory 7%-8% economic growth. During the four-year term, the Modi administration has undertaken banking and tax reforms as well as road and rail infrastructure constructions, which has contributed to India's steady economic growth. However, according to World Bank's latest Doing Business (DB) Report, India only ranks 100 among 190 countries assessed by the DB team based on the ease of doing business in the country. With less than 12 months to go until the next general election, the question is whether Modi is ready to take on the next challenge.

Furthermore, India's GDP expanded at 7.7% in first-quarter 2018. Everyone realizes that foreign businesses and investments are instrumental to accelerating economic growth and thereby engaging the younger generation entering the workforce and expanding the middle class population. India received a fairly large sum of US$40 billion in foreign investments for the year 2017. Although its 7%-8% GDP growth is outstanding in comparison to many other countries, it is hardly satisfactory considering India's massive population and the pressure from China.

Based on 2017 World Bank data, India's per capita income at US$1,709 is running far behind China's at US$8,123. Although people generally think movement of goods has become easier now, critics say that labor reforms by the Modi administration make it difficult for enterprises to lay off employees and the discontinuation of two rupee banknotes at year-end 2016 was a banking reform measure that did nothing more than harassing people and disrupting capital flow. In addition to the problem of widening current account deficit, there is also a plethora of things to tackle, which the India government will not be able to resolve in a short period of time. As such, Taiwan businesses making a foray into India will inevitably sustain loss and inefficiency in the beginning. Should they look at things in the long run and take early action or should they wait till everything is in place and make their move? 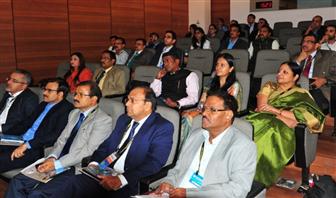 An Indian delegation visiting HSP in 2016. 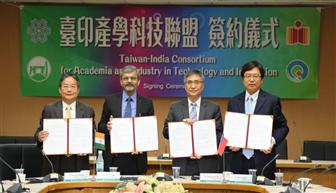 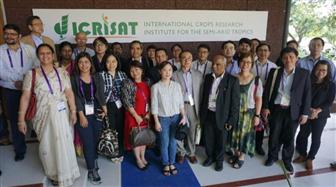 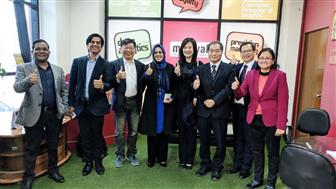