iGame is Colorful's only graphics card brand with a high-end positioning. Undergoing a decade of development since its debut in 2008, the iGame series has expanded to include motherboards, storage and memory devices entering the market this year and has secured the largest share of the brand graphics card market. Gearing iGame toward the gaming segment, Colorful forayed into international markets in 2017 and is enjoying rapid growth in shipments to Southeast Asia and Korea. In particular, iGame SSD is gaining widespread popularity in Japan.

With 22 years of continuing efforts and extensive experiences in the DIY computer market, Colorful has been able to stay as the top vendor in the China brand graphics card market for 15 years in a row.

Colorful participates in a variety of gaming events to engage gamers. Hot League of Legends (LOL) e-sport teams including Snake and RNG have chosen to use iGame in training and competition. Colorful has designed iGame with gamers in mind and crafted motherboards and graphics cards specifically for e-sport teams. Furthermore, Colorful has been participating in or sponsoring e-sports tournaments including LOL, Overwatch, PlayerUnknown's Battlegrounds and Dota 2 at home and abroad and also organizing its own Colorful Games Union (CGU) competitions. By partaking in global e-sports games, Colorful looks to enhance the iGame brand awareness.

Celebrating iGame's 10th anniversary, Colorful will unveil a whole-new logo in addition to the latest generation graphics cards, motherboards and memory devices with the iGame theme design at COMPUTEX 2018. It will also jointly present two new gaming computers with Chaintech and Intel in the afternoon of June 6.

Colorful's iGame GTX1080Ti Vulcan X OC is powered by the advanced Pascal GP102 GPU, featuring a one-key overclock of 1620MHz and a boost clock of 1733MHz as well as 11G GDDR5X 352-bit memory. It is equipped with a high-performance power supply for the GPU core and memory, the SWORIZER cooler, 1.68 million color-capable RGB lighting, and PCB protected with high-strength alloy. As a most prominent feature, the cooler is built in with the iGame Status Monitor which shows the core frequency, core temperature, fan speed and memory usage during operation. The core usage and load level is displayed in the form of a load bar so the user can stay aware of the current operating condition of the graphics card. 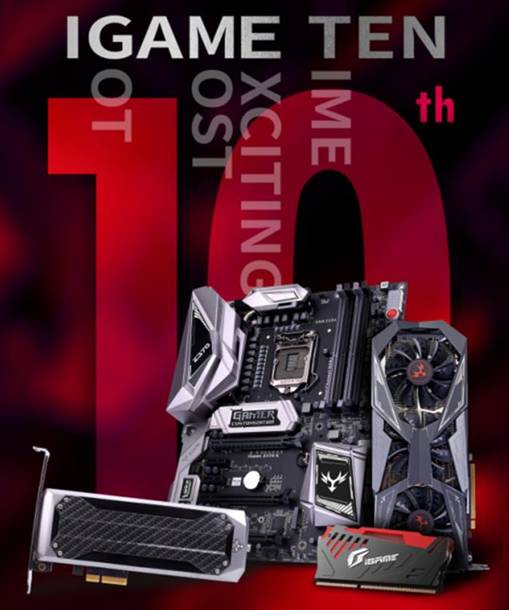