At the recent Digitimes Embedded Technology Forum (DTF), Kamal Khouri, AMD marketing director of embedded solutions, delivered a keynote where he provided AMD's view on the challenges and opportunities represented by the expansion of smart devices and supporting IoT infrastructures. He also elaborated on roadmap highlights and development plans AMD has for delivering near- and mid-term computing solutions called "Ambidextrous computing." This new roadmap combines powerful graphics performance using a shared, flexible infrastructure to enable both the x86 and 64-bit ARM core ecosystems.

Khouri also noted that AMD is seeing key trends for the upcoming year on the development of the IoT market.

The first trend seen in the IoT (Internet of Things) area is that more and more smart client devices are enabling realistic natural human communication. Smart cloud services are connecting tens of billions of devices in real time, and Smart Things are extending IoT technology across multiple platforms without human input. Taking medical imaging machines as an example, Smart Things from small sensors to cloud applications are creating a revolution in the electronics industry.

The second important trend is virtualization powering IoT applications. Visual information is much more efficient for humans dealing with Smart Things. The market for digital signage and gaming applications massively relies on visual features and is creating tremendous growth momentum for the electronics industry. Moving into the future, utilizing the GPU to accelerate applications will play a more important role than before.

The third trend is the dominance of two key CPU architectures. While the interaction between IoT devices involves massive data collection and software processing capabilities, computing power requirements will be very different than the programming methods used in the past.

From AMD's internal analysis based on historical and projected combined revenue shares across processor architectures for mobile devices to cloud servers, x86 and ARM-based solutions will account for 80% of the CPU market and dominate the future computing world.

The question is not which CPU architecture is better. The real question is how quickly you can develop IoT devices and can the ecosystem support your needs using this architecture in order to accelerate time-to-market?

These aforementioned trends have made AMD realize the nature of future computing will take both serial and parallel paths at the same time. Ambidextrous computing, the new AMD product roadmap in 2015, reveals a design framework that features x86 cores and 64-bit ARM cores that are pin-to-pin compatible, allowing the motherboard to run off both SoCs and APUs. And the versatile form factors fit the various requirements of IoT and embedded solutions. The wider range of devices covered span simple wearable devices to sophisticated cloud servers.

Project SkyBridge, the first AMD Ambidextrous solution in 2015, will feature the new family of APUs and SoCs based on low-power 20nm Cortex A57 cores with AMD's GCN core architecture. In simple terms, Project SkyBridge will allow these low-power 64-bit ARM based SoCs to run on the same motherboards as x86 low-power SoCs and will feature AMD's upcoming Puma+ cores which were recently introduced as a part of the AMD Mullins and Beema APU lineup.

These new AMD APUs and SoCs will also be among the first to feature full support for Android OS platforms, Microsoft Windows, RTOS and Linux operating systems. So this could help AMD to soon enter the mobile sector as technology becomes more favorable for small form factor based IoT products.

Khouri ended his keynote by noting that Internet connected devices are forecast to reach 26 billion units by 2020. And the question he asked to everybody was, "How do we handle the technology challenges for managing communication among all of these devices? It seems AMD is trying to answer the question by using Ambidextrous computing to link software, hardware solutions and the entire ecosystem. 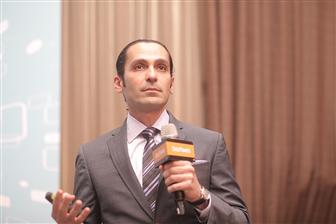