Nvidia has unveiled a new family of Tesla GPUs based on the Nvidia Kepler GPU computing architecture, which, according to the company, makes GPU-accelerated computing easier and more accessible for a broader range of high performance computing (HPC) scientific and technical applications.

The new Nvidia Tesla K10 and K20 GPUs are computing accelerators built to handle complex HPC problems. Designed with a focus on high performance and power efficiency, Kepler is three times as efficient as its predecessor, the Nvidia Fermi architecture, which itself established a new standard for parallel computing when introduced two years ago, Nvidia claimed.

Nvidia said it has developed a set of architectural technologies that make the Kepler GPUs high performing and highly energy efficient, as well as more applicable to a wider set of developers and applications including SMX Streaming Multiprocessor, Dynamic Parallelism and Hyper-Q

Optimized for customers in oil and gas exploration and the defense industry, a single Tesla K10 accelerator board features two GK104 Kepler GPUs that deliver an aggregate performance of 4.58-teraflops of peak single-precision floating point and 320GB per second memory bandwidth.

The Nvidia Tesla K20 GPU is the new flagship of the Tesla GPU product family, designed for the most computationally intensive HPC environments. The Tesla K20 is planned to be available in the fourth quarter of 2012.

The Tesla K20 is based on the GK110 Kepler GPU. This GPU delivers three times more double precision compared to Fermi architecture-based Tesla products and it supports the Hyper-Q and dynamic parallelism capabilities.

In addition to the Kepler architecture, Nvidia has also released a preview of the Cuda 5 parallel programming platform. Available to more than 20,000 members of Nvidia's GPU Computing Registered Developer program, the platform will enable developers to begin exploring ways to take advantage of the new Kepler GPUs, including dynamic parallelism.

The Cuda 5 parallel programming model is planned to be widely available in the third quarter of 2012. 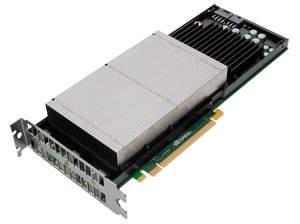