India: The two-wheelers and three-wheelers market

India's annual sales of two-wheelers once exceeded 20 million units but dropped to about 15 million units in 2020 due to the impact of the pandemic. Hero was the top motorcycle brand, with sales of 4.73 million units followed by Honda's 3.06 million units. Homegrown manufacturer, Chennai-based TVS, was in third place with 1.8 million units, and Bajaj with 1.42 million was fourth. Japan's Suzuki and Yamaha both have deployments in India. These companies are still in their inception stages of investment in electric vehicles (EV) except Hero Group, who invested in Hero Electric to capitalize on business opportunities for electric motorcycles.

Like other industries, India's motorcycle industry is distributed in the three industrial clusters located in the north, west, and south. The electric two-wheelers is a sector of great potential growth. Manufacturers are springing up like mushrooms in these three regions. Foreign investors may find local partners from these three regions. To operate in the entire Indian market, however, they need local partners which have nationwide coverage, since India is a large country with states undertaking different tax systems resulting in administrative hassles.

India is the world's largest two-wheeler market. New registrations each month since 2020 amount to about 1.2-1.3 million units. Although sales had plunged after April 2021 due to the impact of the pandemic, they have picked up again since the third quarter.

The proportion of private electric three-wheeler vehicles in India is relatively low. According to data released by the Indian government, for the first three quarters of 2021, tuk-tuk for business purposes accounts for 86%, with the remaining 14% mainly for transporting goods. Furthermore, there are as many as 300 electric three-wheeler companies in India. The thing is they offer refitted vehicles of varying quality. Some of the vendors have been using lead-acid batteries, which are not eligible for FAME-II subsidies. Evidently, these vendors are looking for a head start in the EV sector.

Companies including Mahindra, Okinawa, Ather and Ampere are expanding their production capacity, targeting at yearly output of one million units and rolling out battery swapping systems or charging stations. What's more, traditional motorcycle enterprises are also eyeing the EV market. These are indications that local companies have high expectations of India's EV market.

India's electric motorcycle market has great potential fueled by new features and new business models. We believe that these new business models are likely to incorporate partnerships with the local ecosystems and unicorns. We are aware of various fundamental changes taking place from Northeast Asia to South Asia, as well as the needs for indispensable local partnerships. 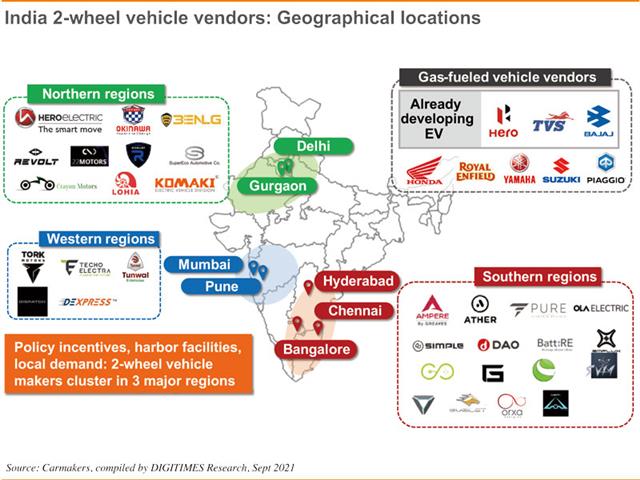