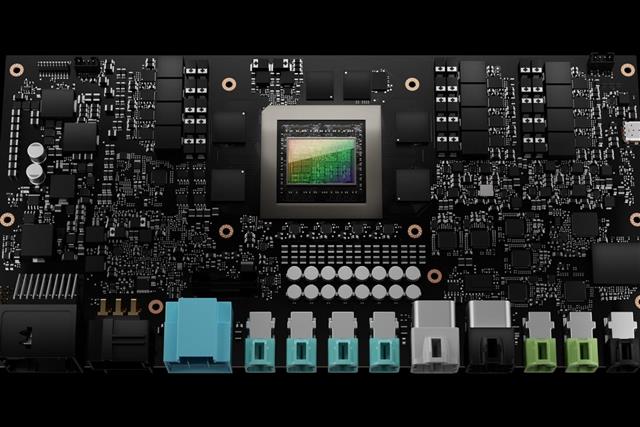 The next-generation superchip comes packed with the cutting-edge AI capabilities first introduced in the Nvidia Hopper multi-instance GPU architecture, along with the Nvidia Grace CPU and Nvidia Ada Lovelace GPU. Drive Thor with MIG support for graphics and compute enables IVI and advanced driver-assistance systems (ADAS) to run domain isolation, which allows concurrent time-critical processes to run without interruption. Available for automakers' 2025 models, it will accelerate production roadmaps by bringing higher performance and advanced features to market in the same timeline.

"Advances in accelerated computing and AI are moving at lightspeed," said Jensen Huang, founder and CEO of Nvidia. "Drive Thor is the superhero of centralized compute, with lightning-fast performance to deliver continuously upgradable, safe and secure software-defined supercomputers on wheels."

Drive Thor is the first AV platform to incorporate an inference transformer engine, a new component of the Tensor Cores within Nvidia GPUs. With this engine, Drive Thor can accelerate inference performance of transformer deep neural networks by up to 9x, which is paramount for supporting the massive and complex AI workloads associated with self driving, said Nvidia.

The new superchip also uses the latest NVLink-C2C chip interconnect technology, while running multiple operating systems. The advantage of the NVLink-C2C is its ability to share, schedule and distribute work across the link with minimal overhead. This equips automakers with the compute headroom and flexibility to build software-defined vehicles that are continuously upgradeable through secure, over-the-air software updates.