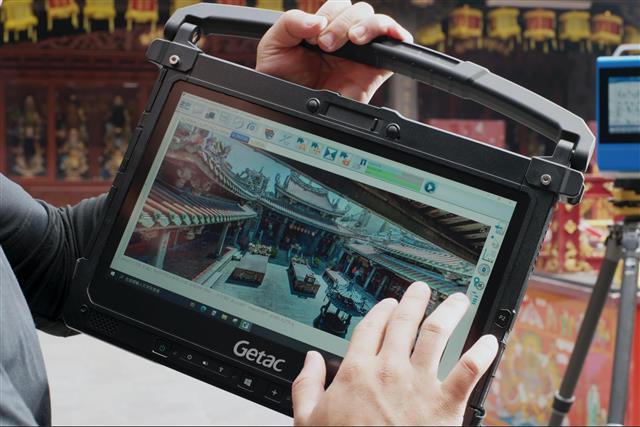 To the people of Taiwan, temples are not just a haven for souls and a place for social activities; they are also where art and culture are passed down to future generations. From the overall architectural design of the temples to the stone sculptures, wooden sculptures, and colorful paintings within and outside of the temples, everything is a testament to the skillful craftsmanship and creativity of Taiwan's ancestors. Among them, Lugang Mazu Temple is one of Taiwan's most representative Mazu temples due to the bustling trading activities in the early days of Lugang, the exchange and integration of cultures, as well as its elaborative architectural features. Every beam and pillar is proof of the rich cultural aspects of Lugang. Therefore, when the Ministry of Culture launched the e-Taiwan Project years ago, Lugang Mazu Temple was listed as an important historical site that required digitalization. Thanks to the Getac rugged K120 tablet and 3D laser scanners, the entire view of the historical monument has now been preserved in exceptional detail.

In 2015, the Ministry of Culture commenced the task of digitally modeling Taiwan's national monuments. Following a thorough inspection, 106 historical monuments were listed as preservation targets. The digital scanning of all monuments is scheduled to be completed by 2026.

Chen Chun-Yu, assistant researcher at the Institute of Cultural Heritage Preservation Research Center of the Bureau of Cultural Heritage, Ministry of Culture, stated: "Taiwan has a subtropical climate and has historical monuments that represent the country's architectural cultural assets, which have existed for centuries; however, they are prone to damages caused by natural disasters or man-made factors. Hence, digital scanning can facilitate their future research, restoration, and reuse."

Chen Chun Yu mentioned two cases as comparisons. The 921 Earthquake in 1999 destroyed many cultural assets in Taiwan. At the time, technology was not as advanced. These assets could only be restored through historical memories and old photos, resulting in discrepancies in the monuments' details. The Notre Dame de Paris fire broke out on April 2019. Luckily, the Notre Dame cathedral had already gone through digital modeling in 2015. During its restorative construction, the 3D-scanned data was transferred into cross-sectional prints of 2D plans and elevations. These served as detailed reference data to present accurate images of the Notre Dame cathedral before the fire. These two cases serve as great examples of the importance of digital modeling.

Among the national monuments of Taiwan, Lugang Mazu Temple is the only temple dedicated to Meizhou's founding Mazu. More than 400 years have passed since its founding in 1591, during the late Ming Dynasty. It is one of the most symbolic Mazu temples in Taiwan. It is also a crucial site for historical and archaeological research, as well as a place to study folk religions.

Liu Chia-Wen, director of the Lugang Mazu Temple, said: "The heavy-sloped, hip-and-gable roof of the front hall (known as Sanchuan Hall) and the stone and wood carvings within the halls have all been recognized by the academic circle to be one of the most exquisite works of art in Taiwan. However, more than four centuries have passed; many tools and artifacts are thus facing gradual deterioration."

Liu Chia-Wen used the Phoenix Palanquin as an example. It is a man-drawn carriage used to carry Mazu during pilgrimages. Its construction started in 1919 and took four years to complete. Its interior is designed to look just like a mini temple with dragon pillars and hanging canisters. No silver nails were used to build the structure; the techniques used were very elaborate and detailed. After a hundred years of use, the Phoenix Palanquin's structure is already falling apart and it can no longer be moved. Worse still, no craftsman can restore it.

Liu Chia-Wen said: "We hope to completely preserve the structure of the Phoenix Palanquin through 3D technology for future research or restoration."

Yao Liang-Chu, manager at LeaderTek, was in charge of scanning the worksto build a digital database of Lugang Mazu Temple.. With a Getac rugged K120 tablet in hand, he inspected the data sent from the 3D laser scanner. This 3D scanner can emit one million laser points at once with a one-millimeter distance between each laser point. These dense laser points were sent back to the 3D scanner after touching the object. The scanner then sent the enormous amount of data to the Getac K120 tablet via Wi-Fi for computation and structuring. The tablet presented images on its screen. At the same time, the Getac K120 tablet sent these images back to the 3D laser scanner for correction and tuning via Wi-Fi. The K120's excellent connection capabilities allowed the details of the image to reflect perfectly the scanned object.

Yao Liang-Chu said: "3D modeling of historical monuments must be done outdoors; therefore, the structural design and hardware specifications of the computer that is paired with the 3D laser scanner are of great importance. In the past, LeaderTek used a regular laptop to connect with the 3D laser scanner. The scanner sent point cloud data back to the laptop for computing and storage after scanning. However, commercial laptops are designed to be used indoors and are not suitable for outdoor usage. This is because the sunlight can make it difficult to read the screen, and it's not easy to plug in a laptop for charging when outdoors. In addition, 3D point cloud processing has high demands for computing resources and a regular laptop's battery tends to run out very quickly. Under full-speed operation, batteries will run out in one to two hours, limiting the time for working."

Overheating in laptops due to high computing demands is another factor that impacts work efficiency. According to Yao Liang-Chu, modern laptops have sufficient performance capabilities; however, after a long period of high-speed computing their performance decreases due to overheating. The computers then need to be shut down for 10 to 15 minutes until they have cooled down enough to start working again. This meant that, when using non-rugged laptops, LeaderTek's team had to change how they worked. For instance, when outdoors, they had to rely on their professional expertise to judge if the images were accurate. Data inspection had to be performed indoors after all outdoor work had been completed. These methods jeopardized the team's overall work efficiency.

Yao Liang-Chu said: "During 3D scanning, the Getac K120 tablet and the 3D laser scanner must be connected at all times to send data back and forth; therefore, the demand for high computing and data traffic capabilities is enormous. In the past, users needed to wait for the overheated commercial laptop to cool down, and only 20 station points at most could be scanned per day. The Getac K120 tablet is designed to meet high stability requirements, so the team can run the tablet at high speed for long hours. This greatly enhanced the efficiency of the LeaderTek team, who can now scan up to 70 station points in a day, making the Getac K120 2.5 times more efficient than their previous devices.

Another benefit of the wireless and simultaneous connection between the Getac K120 tablet and the 3D laser scanner is that users can inspect scanning results and relevant data on the spot. If the results are not up to standard, they can immediately correct the way they scan. This advantageous feature solved the issues caused when the team could only inspect the data indoors once the outdoor work had been done. This has greatly boosted work efficiency.

In addition to high performance computing capabilities for long periods of time, the Getac K120 tablet also has a special design and exclusive accessories to allow for more convenient and successful 3D scanning. On the day the team scanned the Lugang Mazu Temple, it was a hot, sunny day. However, this did not affect the visibility of Getac K120's screen, with users easily able to clearly read the screen even under the blazing sun.

Yao Liang-Chu said: "When working outdoors, devices may fall to the ground accidentally while moving around. Laptops cannot be too fragile and break easily. Getac K120's ruggedness ensures work quality in hazardous environments."

In addition to the tablet's ruggedness, Getac K120's accessories such as the shoulder strap, hand strap, and hard handle, make it much easier to move and carry the tablet. Another significant advantage is the Getac K120's long-lasting battery. During high-speed computing, most commercial laptop batteries can only last for approximately two hours and it can be challenging to charge a device when outdoors.

Yao Liang-Chu said: "Getac K120's battery can last for six hours so we don't have to worry about charging devices outdoors anymore."

On the day of scanning Lugang Mazu Temple, it was also graduation season for the local schools. Therefore, not only devotees came to the temple, many young students were also present. Liu Chia-Wen pointed out that Lugang Mazu Temple is a prized treasure of Taiwan; however, it has also been the victim of time and natural disasters. Because of the temple's deterioration, it has become increasingly difficult to preserve its architecture and artifacts. Digital preservation can keep the original state of the artifacts without damaging them, making it the perfect preservation method.

Yao Liang-Chu said: "With the help of 3D laser scanners and the Getac K120, we successfully finished scanning the temple. The exquisitely-built and history-rich monuments and artifacts can now be passed down to future generations so that they can witness the beauty of Taiwan." 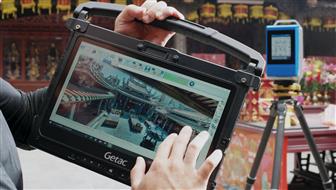 Lugang Mazu Temple is located in an area with typical Taiwanese south-central weather, but the bright sun does not affect the visibility of the Getac K120 tablet. Its screen image is still clearly visible under the blazing sun. 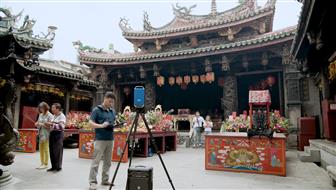 Thanks to the Getac K120 professional tablet and 3D laser scanners, the Bureau of Cultural Heritage of the Ministry of Culture, in cooperation with LeaderTek, preserved the complete architecture and artifacts of Lugang Mazu Temple in perfect detail.