Taiwan at the crossroads: China-free or China+? 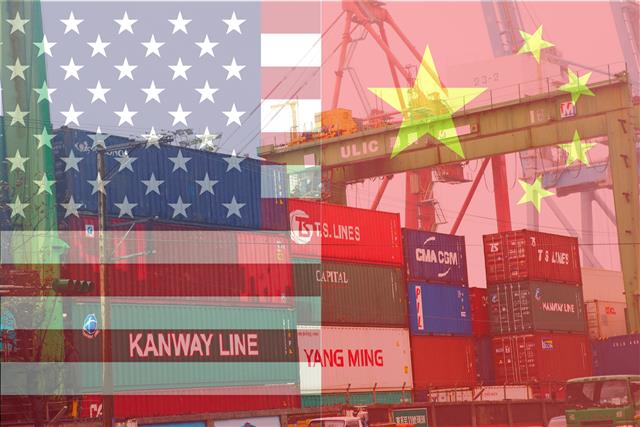 Global supply chain restructuring that is being accelerated by the US-China trade war and the COVID-19 pandemic gears toward two directions in view of geopolitical factors: "China+1" - the business strategy to still tap the China market but diversify production to other countries to avoid punitive US tariffs on Chinese goods; and "China-free" - the initiative to drive self-sufficiency to counter China's dominance and protect national security.

The two considerations centered around China mirror something that everyone will agree: the risks of excessive concentration on China have outweighed the benefits of maintaining the status quo. China+1 will be a likely choice for most vendors based in Taiwan, a small-to-mid size economy lacking resources and isolated from the international community. However, as Taiwan is caught in the middle of a geopolitical wrangling between the US and China, vendors also may as well go with China-free at the right time.

According to Foxconn chairman Young-Way Liu, the manufacturing supply chain is to transition from the model where production bases are clustered in China - the world's factory - to regional production. Foxconn's proportion of production capacity outside of China now stands at 30%, up 20% since June 2020. It is diversifying more manufacturing to Southeast Asia, India and the Americas, each of which will have an individual manufacturing ecosystem.

Getting caught up in the power play between the US and China, Taiwan needs to please both sides. As semiconductor becomes a key battleground in the US-China tech war, TSMC plays a strategically important role and has been "requested" to build a 5nm wafer fab in Arizona. This is an example of the China+1 strategy. Barred by the US government from supplying semiconductor chips to Chinese companies on the Entity List, Taiwan-based makers have no choice but to adopt China-free planning.

But Taiwan's ratio of exports to China has not decreased but has increased instead although Taiwan's New Southbound Policy has been in place for more than four years and Taiwanese investment in China has begun to decline due to the US-China trade conflict. According to the Ministry of Finance's Summary of Exports and Imports, Taiwan's exports to China and Hong Kong in the first three months of 2021 represented 42.9% of Taiwan's total exports, up 2.6pp from the ratio of 40.3% in 2011. The year-over-year growth registered at 35.5%. 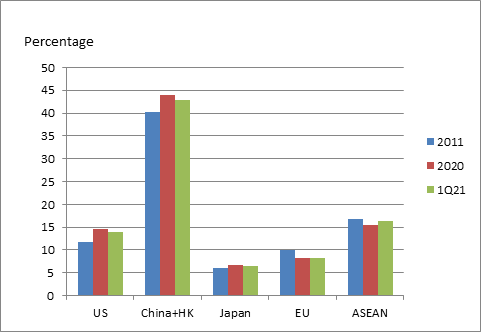 Source: Government, compiled by Digitimes, May 2021

Taiwan's ratio of exports to the US also climbed 2.3pp to 14%, growing 24.1% year-over-year. The value of Taiwan's exports to Europe and ASEAN countries also showed growth but the ratios declined 1.7pp and 0.4pp respectively from the corresponding period of last year.

Why do Taiwan's exports to China and the US both show double-digit increases? Many observers attribute the trend to makers' China-free planning. As a matter of fact, China's supply chains are trying to find alternatives to American products, shifting toward US-free. The two large economies are decoupling, each striving for self-sufficiency. They are bound to see supply falling short of demand. Situations such as overbooking due to lack of information transparency or overstocking amid shortage concerns are inevitable.

It should be noted that China's protectionism has driven the formation of China+1 supply chains in some market segments. However, it's Chinese firms that are the winners that take it all. The No. 1 complaint that US Chamber of Commerce and European Chamber of Commerce members raise in their annual surveys is the barriers to market access. According to the 2019 McKinsey Global Institute (MGI) report, in the case of solar panels, high-speed rail, digital-payment systems, electric vehicles (EV) and container ships, Chinese players account for more than 90% or even 100% of the domestic market.

Shirley Lin pointed out in her article published by Brookings Institute that Taiwan's continued success requires economic diversification of products and markets. Not only must Taiwan maintain leadership in semiconductor, but it also has to reduce its reliance on China. Moreover, it's imperative for Taiwan to enter into a bilateral free trade agreement with the US and to integrate into the international community, such as joining WHO and CPTPP. This requires support from democratic countries and the international community. Otherwise, Taiwan by itself has difficulty countering China's gravitational pull.