The world's first x8 Octal interface for NAND Flash, Winbond's OctalNAND Flash enables automotive and industrial manufacturers to provide code storage in high density without having to pay a premium and any special hardware change for NOR Flash, a fast memory technology which scales poorly at densities above 512Mbits.

The first Winbond product to include the new interface, the 1Gbit W35N01JW, offers a maximum continuous Read throughput of 240Mbytes/s, three times faster than the earlier high-performance W25N-JW QspiNAND Flash family. The single-die W35N01JW is also 50% faster than Winbond's W72N-JW family of Dual QspiNAND devices, which have dual dies in a single package, and a more complex x2/x4/x8 I/O architecture.

Winbond developed OctalNAND Flash because automotive and industrial OEMs are reaching the limits of NOR Flash technology's ability to scale cost effectively while being assembled in industry standard packages. In applications such as automotive graphics displays and Advanced Driver Assistance Systems (ADAS), boot code size is often larger than 512Mbits. Customers have traditionally used NOR Flash for code storage, because it is highly reliable, and its fast Read throughput supports fast boot performance. At densities above 512Mbits, however, NOR Flash scales poorly, and die size and cost become excessive.

Because NAND Flash technology scales well, its cost is more attractive at densities of 1Gbit and higher, but conventional NAND Flash has been too slow for functions such as shadowing boot code to DRAM.

Takehiro Kaminaga, Deputy General Manager of Winbond, says that the new OctalNAND Flash squares the circle. He says: 'Customers in the automotive and industrial markets can now benefit from 240Mbytes/s Read performance in devices with 1Gbit-4Gbit density at a fraction of the cost-per-bit that they pay today for similar performance from an Octal SPI Flash device.'

The new OctalNAND Flash from Winbond offers partial compatibility with Octal NOR Flash, easing replacement of NOR Flash devices in existing designs. The industry-standard 8mm x 6mm BGA package of the W35N-JW device is footprint-compatible with serial NOR flash products, and is fully pin-compatible with that of Xccela Flash and OctaFlash NOR products on the market today. Lead automotive customers are using the 1Gbit W35N01JW OctalNAND Flash to replace Octal NOR Flash memory products in new designs, benefiting from a shorter boot time and lower bill-of-materials cost.

The W35N-JW parts include a Reset pin, a hardware feature which supports customers' approach to compliance with automotive safety requirements. This Reset pin is compatible with the pin-out of equivalent NOR Flash devices, enabling customers to retain existing serial NAND software for triggering a system re-boot.

The W35N-JW family operates at up to 166MHz in single data-rate mode, and up to 120MHz in double data-rate mode. It operates from a supply voltage of 1.7V-1.95V. Data integrity is maintained by the on-chip 1-bit Error Correction Code (ECC). Data from ECC operations help optimize the chip's bad block management.

More information about the Winbond OctalNAND Flash and the W35N-JW family may be found at website. 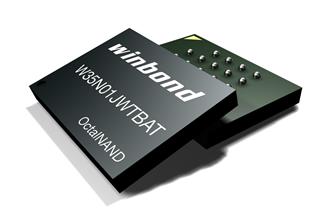