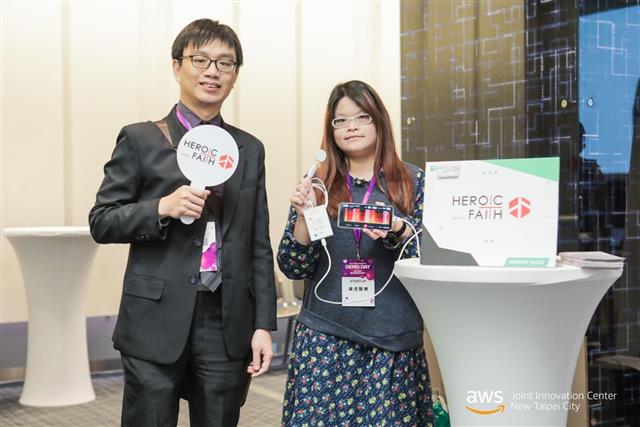 Heroic-Faith Medical Science expects its AI-powered respiratory monitor to receive US FDA clearance this year, according to Taiwan-based startup.

Medical personnel can hear the breathing sounds broadcasting from the device or through Bluetooth earphones in real-time, and meanwhile, visually observe the sound spectrogram from the screen. The alert system further assists clinicians in early detection of respiratory compromises, according to the company.

HeroicFaith's respiratory monitor has just won the Best Innovation Award out of the 13 contestants on a demo day held by AWS innovation center in Taiwan. It was also showcased at CES 2020.

Respiratory monitoring is a crucial but often missing part in the practice of vital signs observation, according to the startup, which was founded in 2018. Aside from the traditional settings in critical care units and operation rooms, there is a rapid growing need as the utilization of procedural sedation anesthesia (PSA) increases. PSA is currently applied for various medical procedures, such as painless gastrointestinal endoscopic examinations, dental, plastic surgery, ENT, and OB/GYN procedures, and cardiovascular catheterizations. Patients under PSA do not need to suffer from endotracheal intubation, and therefore enjoy a shorter recovery time and fewer airway aftermaths. The total number of PSA performed annually in the US is estimated to reach 100 million, while there are four million practices annually in Taiwan. The mortality rate related to PSA is reported to be 2-5 persons in every 100,000 practices.

Continuous respiratory monitoring is mandated during procedures under non-intubated sedation in the guidelines set by the American Society of Anesthesiologists and American Dental Association. In Taiwan, the rising fatal consequences also triggered more stringent regulation enforcement in patient safety monitoring. Until now, this requirement is often relied on the measurement of peripheral capillary oxygen saturation (SpO2) and end-tidal carbon dioxide (EtCO2), without direct breathing detection. The accuracy is in doubt when used in open-mouth/facial surgeries or high flow oxygen is needed.

Tags
FDA innovation news monitor Smart applications startup US
Share this article
Other links
Print
Related content
Related stories
TTA startups win significant business opportunities at CES 2020, says MOST
13 Taiwan startups win CES 2020 Innovation Awards
RedEye to showcase optical hemoglobin sensor at CES
Heroic Faith Medical launches chest sound monitor solution to check on lung diseases
Related topic
Innovations
Looking for startups?
Startup database
Profiles of startups from Taiwan and around the world: their technologies, product developments, fundraising rounds, etc. All startups are welcome to register their profiles - free of charge.
Register
Accelerators & incubators
Information about accelerators and incubators from Taiwan and around the world that are mentoring startup businesses and teams. All mentors are welcome to register their info - free of charge.
Register
Events calendar
Major events, including those organized by the government, DIGITIMES, and others, featuring startups, innovative technologies and products from Taiwan, Asia and around the world.