EMS provider Qisda has disclosed it has seen 74% in improvement in production efficiency from adopting collaborative robots for production lines at its factory in northern Taiwan, with about 30 workers originally assigned for a production line reduced to 12-15 ones.

Qisda said its production lines need to be adjusted quite often to cater to different specifications and sizes for diverse product models. To facilitate flexible adjustments, Qisda sid it began to deploy collaborative robots in 2016, with such robots collaborating with workers to reach flexibility in adjusting production lines.

The use of collaborative robots is in connection with MES (manufacturing execution system) and WMS (warehouse management system), Qisda added.

With collaborative robots, the time taken to adjust a production line for different product models has been shortened from 30 minutes to less than three minutes, Qisda said.

Making collaborative robots easy to operate by simplifying programming and optimizing user interfaces is key to boosting use of such robots, according to Taiwan-based collaborative robot maker Techman Robot. Techman has offered TM Plug & Play kits which enable users of its collective robots to quickly finish hardware/software setting to reduce part of cost for system integration. 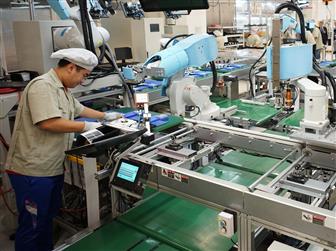 Tags
ICT manufacturing IT + CE IT components, peripherals Qisda Server, IPC, cloud computing, IoT
Companies
Qisda (formerly BenQ)
Looking for startups?
Startup database
Profiles of startups from Taiwan and around the world: their technologies, product developments, fundraising rounds, etc. All startups are welcome to register their profiles - free of charge.
Register
Accelerators & incubators
Information about accelerators and incubators from Taiwan and around the world that are mentoring startup businesses and teams. All mentors are welcome to register their info - free of charge.
Register
Events calendar
Major events, including those organized by the government, DIGITIMES, and others, featuring startups, innovative technologies and products from Taiwan, Asia and around the world.
Supply chain