Taiwan biking software platform Velodash app has been selected by Singapore to record the country's RIBA (Round Island Bike Adventure) activity to be held on August 5, the city state's national day, and organizers of the event will grant gold, silver and bronze awards to cyclists completing the adventure based on the app records.

Voldash CEO Molly Huang said that the app can not only serve as a biking recorder, but also help plan cycling routes, schedule group rides, and make riding appointments, with global cyclists also able to do exchanges on the app.

Huang said that Velodash app has incorporated thousands of cycling routes in Taiwan, Japan, the US and Singapore. Since its launch in May 2018, the app has attracted 8,000 users, including 5,000 in Taiwan. 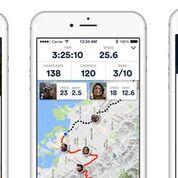