The global top-five notebook brand vendors and top-three makers both suffered 0-3% of on-month shipment declines in February, a range similar to that a year ago. The decline in February was caused mainly by inventory adjustments in the month. As for March, brand vendors are taking a more conservative attitude which could result a 7% on-year drop in Taiwan's notebook shipments in the first quarter of 2014, according to Digitimes Research.

Among brand vendors, Hewlett-Packard (HP) had the best performance in February with an on-month growth of over 30%, while others suffered on-month decreases. Asustek Computer had an over 10% on-month drop in February, but still maintained its shipments at 1.3 million units (excluding the T100, which is considered tablet), beating Acer for two consecutive quarters. Acer's monthly shipments were around one million units, a volume similar to that of Apple.

Notebook ODMs were all impacted by on-month drops in February shipments. Although makers had similar on-month performances in February, their results in March are expected to be a lot different. Compal Electronics is expected to see shipment growth thanks to Lenovo's orders, while Inventec will suffer a shipment drop due to Toshiba shifting orders away from the maker.

With Satya Nadella, who has no experience in Windows and hardware development taking the position as CEO of Microsoft, and the software giant activating licensing fee discounts for sub-US$300 notebooks, Digitimes Research believes the board at Microsoft is hoping Nadella, who carries no burden from the past, will be able to significantly reform the company.

Sony abandoning its Vaio PC business indicates the vendor's differentiation strategy has failed to work. Sony has already stopped placing orders for notebook components and Taiwan's orders for Vaio notebooks in the second quarter may drop to less than 30% of the volume in the first quarter. 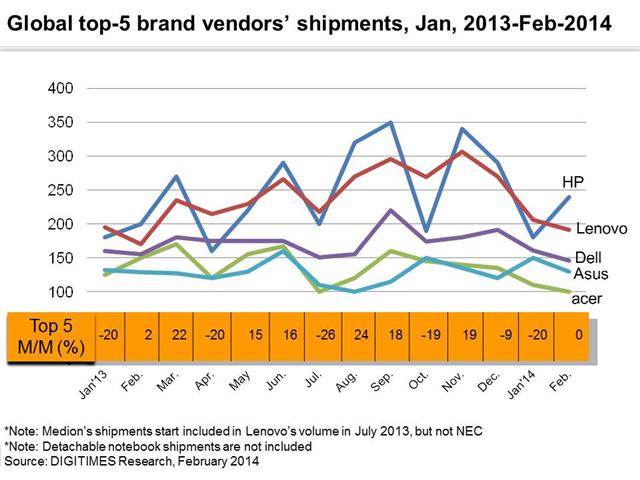