As many motherboard players have started paying attention to the gaming market, Elitegroup Computer Systems (ECS), as a major motherboard vendor, is also set to expand its gaming business with a new product series. In addition, the company is eyeing better shipment performance in 2013, boosted by its new Durathon certification system to guarantee product quality. Digitimes recently met with company vice president of Channel Business Unit, Samuel Yeh, to talk about ECS' plans for Computex 2013, the status of its existing product lines, and its marketing strategies.

Q: What new products or technologies will ECS showcase at Computex 2013?

Meanwhile, we will also release a new series of gaming motherboard products called LEET. Since demand for conventional PC products has already started to slow down, most motherboard players have turned to the high-end segment looking for opportunities. ECS will not miss this trend and will place significant resources on strengthening our competitiveness.

At the show, you will be able to see our new Intel 8 series-based LEET motherboards with several demonstrations to showcase their performance.

In addition to motherboards, ECS will also demonstrate several all-in-one PCs with our latest designs at the show. Some of the features include lay-flat support that allows multiple users to play games such as chess on flat table-like systems. We will also offer different display sizes from 21- to 23.6-inch for these all-in-one PCs.

ECS also has some tablets we developed with Intel's support. These Intel-based tablets will mainly be pushed for OEM orders, and feature 7- or 10-inch displays.

During the show, we will also host the finale of our MODMAN competition, a tournament for chassis customization enthusiasts.

Q: Can you elaborate on Durathon certification and LEET gaming? How are these technologies going to help you gain advantages in the market?

A: Durathon is a certification system that is far stricter than the average in the motherboard industry. We use better materials for our motherboards and put them through strict tests such as temperature tests running from minus 10- to plus 50-degree Celsius, higher than the industry's standard range of between minus 5 to plus 45, to ensure our customers receive products with higher than standard quality.

Before shipping, our motherboards need to pass more than 1,500 tests including compatibility, functionality, temperature and system boot checks. Through these tests, we are aim to let customers know that a trustworthy motherboard needs to be at least able to pass these examinations before it is handed to them.

The capacitors we use on our motherboards are also higher grade compared to the market standard. All these demands are aimed at providing our customers with products that surpass their value in price. In the future, we will continue to run Durathon certification and expand tests to ensure our product quality remains the highest.

Durathon comes from two words: Durability and Marathon. We designed the certification system hoping our motherboards' durability and stability can be similar to running a marathon - long and tough. Through the program, we can demonstrate to customers our advantage over product quality.

Q: What are the considerations when designing the LEET series?

A: The product series' name LEET comes from the word elite, a favorite word used among gamers. If you see the logo designed for the series, it represents a fist, showing gamers are ready for competition and its golden color represents ECS' high-end Golden series product line.

We designed the LEET brand to let gamers know that the products in the series are designed specifically for them and we are adding functions and technologies that they want. The launch of LEET will be a brand new start for ECS and we are very excited about the strategy.

As for our marketing strategy, it will also be different from in the past. We will cooperate with gaming teams to endorse our products. We are already in negotiations with some teams and should have results in the near future.

Q: What are the company's thoughts about the motherboard industry in 2013? Are there any specific markets that ECS is focusing on for 2013?

A: I believe the gaming segment will continue to grow in the future. For example, we are now seeing increasing numbers of live broadcast gaming tournaments, showing that the number of people watching e-sports has increased.

Therefore, we have high hopes about the gaming market's future and have placed a lot of resources into the development of our LEET series.

As for the motherboard industry in 2013, we are taking a conservative attitude about its development, but yet still hope to see a good outcome. China will be an important market for us in 2013 as the country has already become the main driver of demand. Although we suffered a shipment drop in China in 2012, we will try to make it up gradually in 2013.

Currently, ECS mainly ships own-brand motherboards to the China market and we are reconstructing our local channels, hoping to raise shipments.

Q: What are ECS' thoughts about Intel's Haswell platform? Is it going to benefit the company in the second half? Are DRAM shortages affecting ECS' motherboard sales performance?

A: The current status of the Haswell platform is in line with our expectations and since we have always followed Intel's steps, our strategy is unlikely to change.

As for the DRAM shortages, since most gamers do not really care about the prices they pay for their hardware, the issue is unlikely to impact our sales in the short term.

Q: What is MODMEN? What are you trying to achieve through the competition? Will the company look host more competitions in the future?

A: MODMEN is a contest we are hosting for motherboard modding enthusiasts worldwide. The competition has already run for a year and will conclude on June 6 at Computex with a championship showdown.

We currently have five candidates who will join the finals and the winner will receive a prize of NT$1 million (US$33,393). In addition to our judging panel, we will also have Computex visitors and fans on Facebook vote for the winner.

We need to thank our Golden series motherboards for the birth of the MODMEN idea. Because of the motherboards, some users started developing unique chassis designs to fit with their Golden motherboards, and once we saw that was happening we decided to expand and promote the activity.

If you come to our MODMAN tournament, you will see that modding is a rather interesting craft, modders demonstrate a lot of innovation, creativity and artistry in their designs.

Q: What is the status of the all-in-one PC market?

A: Despite the PC market's flat performance in recent years, the all-in-one PC segment is still expected to enjoy double-digit percentage growth in shipments in the future, and we expect to be able to catch up with the trend to achieve strong shipment performance. 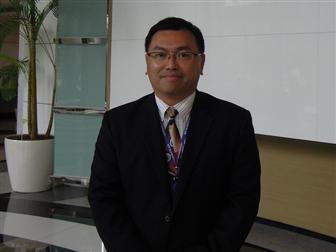