While Taiwan is not usually thought of as being at the forefront of the green revolution, Taipei happened to perform quite well in the Asian Green Index published earlier this year. The Index was the result of a research project conducted by the Economist Intelligence Unit and sponsored by Siemens, and assessed the environmental performance of 22 major cities in Asia, with Taipei landing in the Above Average group with five other cities, trailing only Singapore overall in the region.

Digitimes recently had the opportunity to attend the Global MBA Forum Series at National Taiwan University (NTU) and see Siemens Taiwan CEO Peter Weiss deliver a speech on Answers for Sustainability. After the event, Weiss discussed other topics, including developments in the solar industry and the mindset needed for Taiwan to move up the global value chain.

Q: The Asia Green Index shows that Siemens is especially concerned with developments in urban areas in Asia. Why the focus on cities?

A: When Siemens looks at sustainable global development, we see cities as being the key to the future. For example, cities consume 70% of global energy and produce 70% of the world's output of carbon dioxide. But cities are also the growth engines of the world; 50% of global GDP is generated in cities. So of course we need to see that cities thrive. But at the same time, they cannot continue doing business as usual, because the environmental impact will be immense.

And if you look at various urban regions around world, Asia has its own unique challenges. Approximately 100,000 new people are moving into cities in Asia every day. If you translate that into infrastructure, that means 20,000 new homes need to be built, six million additional liters of drinking water need to be made available and 250 kilometers of new streets need to be built.

In terms of how current cities deal with these issues, Taiwan fares well compared with other Asian cities. Taipei scored quite well when it came to energy consumption and transportation. However, Taipei's water leakage ratio is still quite high, so there is room for improvement.

Q: How can more improvement come about? After all, the region has built its success on being able to control costs and maintain manufacturing efficiency, not energy efficiency. Is there room for green thinking, when you are trying to cut costs?

Historically, this aspect of lifecycle cost has caused some problems here in Taiwan, where people like to build buildings with minimal cost. Sure, when energy efficiency is not a priority, you can save a little bit of money during the construction stage, which is part of the 20%. But in the long run you end up increasing your overall lifecycle costs. To save a little, you might end up using the wrong materials or perhaps implement an inefficient design, which is a mistake in the long run.

Two years ago Siemens did a study with the European Chamber of Commerce and National Taipei University of Technology, looking at the existing building stock in Taiwan. The outcome was promising. With existing building technologies we realized we can save 30% of the energy used by the existing stock if we were to apply new building technologies. Of course the savings are a theoretical one and things will not change overnight, but the point is there is huge potential here in Taiwan.

Q: Do you see attitudes changing in Taiwan? Are governments and businesses interested in wanting to do the "right thing," so to speak, when it comes to building sustainable cities?

A: In many ways change come by necessity and decisions that are "green" decisions can be viewed purely as business decisions. If you look at Taiwan's growth over the past 30-40 years, it has been driven by mass production and reasonable quality products, and Taiwan has been very successful with this strategy.

However, over the past 10-15 years other nations such as China and Vietnam have begun stepping in with the same strategy, so Taiwan has had to adjust its value proposition and learn how to differentiate its products. Local companies need to move up the value chain and implement more long-term strategies. We already see this in the global semiconductor manufacturing industry, where no other nation can touch Taiwan in term of wafer technology.

Going back to the example used with buildings, Taipei 101 highlights how things are changing in Taiwan. Even though the building had a modern design and was energy efficient, Siemens was consulted when the building was seeking to obtain LEED platinum certification. We showed that energy consumption for 101 could be reduced by another 10% and water and waste by 10%. These reductions, in turn, went back to the tenant because operation costs are lower, so rent is able to be kept at a lower level and the building can be run in a more competitive manner.

Looking at Taiwan's various manufacturing industries, the same can be done to improve factory processes and have products more economically developed. And these firms can go back to their customers and be able to say, "Hey, I have a green factory," which only brings more opportunities.

So our value proposition to factories is that we can help them reduce their operational costs and reduce their CO2 footprint, while in a nutshell, helping them become a green company.

Q: One area of green development where Taiwan has had much success is green energy. However, currently the solar industry is in the doldrums, can you comment on the industry moving forward?

A: Despite the current gloom, there is no doubt everyone agrees that there is a future for solar. We are seeing more and more solar installations coming up around the world, not only in PV but in other solar fields as well, such as solar thermal.

While the industry will continue progressing, it is important for players to remain committed. Products brought to the market need to have the highest efficiency because only then do we have a return on investment, and it is important that the resources that we are putting into this industry are being used in the best and most efficient way. It doesn't make sense if we have cells or installations that are not efficient.

The industry went through a period of seeing subsidies stimulate the market, and massive investments have also substantially brought costs down. However, as the cost structure makes the industry more economically viable, it is important for players to keep up the research and development to further improve the technology.

And this advice is useful for Taiwan on the whole. As the region moves up the value chain, it needs to remain committed to improving itself. It also needs to realize it cannot be great in each and every field, so decisions will need to be made. Whether it's the continued development of a few key areas such as semiconductors or whether the focus is on emerging industries like electronic vehicles or biotech, Taiwan needs to choose its focus areas, gather the investment and push all activities in this direction in order to differentiate itself from other countries in the region. 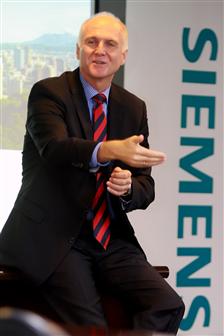