Micro-Star International (MSI) has launched the N450GTS Cyclone series of graphics cards, which are equipped with a Nvidia GeForce GTS 450 GPU core. With MSI's exclusive Cyclone thermal design and a 9cm PWM fan, the airflow of the model is enhanced by 50% and temperature can be reduced by 17 degrees compared to the reference design for the card.

Using MSI's exclusive overclocking software, Afterburner, users can also adjust the GPU voltage and increase the overclocking rate significantly. The company also offers all-solid capacitors in the series to give users high stability and a long product lifespan. The card is also supported by Nvidia's PhysX & 3DVision technologies for an enhanced visual experience. 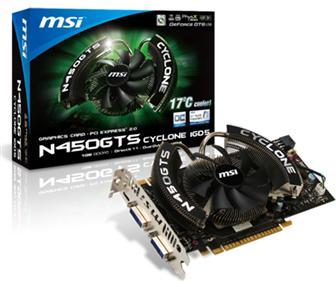