Supply chain
VIA launches VIA EPIA-M830 board with support for Nano E-series CPU
Press release, May 6; Joseph Tsai, DIGITIMES
Thursday 6 May 2010

VIA Technologies has announced the new VIA EPIA-M830 Mini-ITX board. Designed specifically to meet the needs of next generation kiosk, POI and POS applications, the VIA EPIA-M830 places the latest 64-bit VIA Nano E-series processor in an application specific Mini-ITX form factor board.

The VIA EPIA-M830 is available in both active and passive cooling configurations. A fanless 1GHz VIA Nano E-series or performance oriented 1.3GHz VIA Nano E-series processor is joined by the VIA VX800 media system processor providing DirectX 9 integrated graphics, HD audio and Gigabit networking. The VIA VX800 supports up to 2GB of DDR2 system memory and offers video acceleration for MPEG-2, MPEG-4, WMV9 and VC-1 video formats, plus a VMR capable HD video processor. 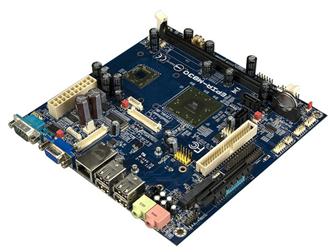 VIA EPIA-M830 Mini-ITX board
Photo: Company